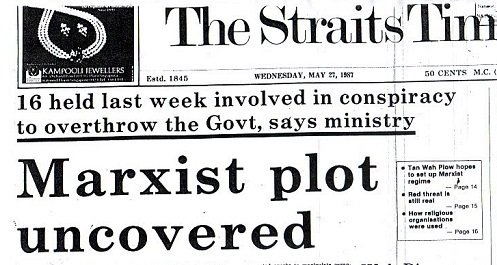 21 May 1987 is the day when 16 social workers were arrested and accused by the Singapore government of Lee Kuan Yew of waging a “conspiracy” to topple the government.

Later, 6 more were arrested for the same reason.

The accused were never charged in open court where they would be allowed to defend themselves, and more importantly, see the proof that the government has for detaining them under the Internal Security Act.

Now, 30 years later, the ex-detainees continue to maintain their innocence, and accuse the government of faking the “conspiracy” for political reasons.

The government, on its part, has continued to maintain that the ex-detainees were subversives, driven by communist ideology.

Yet, the government’s own claims are contradicted by its own ranks, and we are not talking about the lower-downs in the hierarchy. On the contrary, we are referring to a current deputy prime minister, a former Cabinet minister, a former Attorney General, and even the former editor of the government-controlled broadsheet, the Straits Times, and testimonies from journalists who were in the newspaper’s employ at the time.

So, on this 30th anniversary of the arrests, the fundamental issue which we should all focus our minds on is why do these establishment personalities themselves contradict the government’s official narrative?

It is here which we must ascertain the truth which, seen objectively, points to a government plan to plot a fake conspiracy allegation against do-gooders who, for some reason, had gotten into the government’s bad books.

Let us recall the doubts expressed by the abovementioned personalities on the government’s claim that the 22 people were “Marxists”.

The doubts in the so-called “Marxist Conspiracy” of 1987, where 22 social workers were detained after being accused of hatching a “communist” plot to “subvert the system”, remain to this day. In fact, over the years there have been questions raised about the truth and the legitimacy of the accusations and charges leveled at the detainees. Along with these, questions of their detentions and the torture alleged by the detainees themselves.

While the government, throughout the last 30-years since the episode, has always stood its grounds, it is evident that more and more Singaporeans find the government’s case dubious. And these Singaporeans’ concerns are backed up by the public statements of several very senior ministers – including the current Deputy Prime Minister, Tharman Shanmugaratnam; the Emeritus Senior Minister, Mr Goh Chok Tong; former Minister for National Development, Mr S Dhanabalan; and former Attorney-General, Mr Walter Woon, among others.

Mr Tharman had in 2001, put on public record that he does not believe the detainees of 1987 were “out to subvert the system”.

Clearly, Mr Tharman, now being the Deputy Prime Minister, has to clarify his present position on the matter. This is because, as the current DPM, he is in a much better position to have access to information about the arrests and detentions than he was back in 2001. Mr Tharman should clarify if he still holds his position as he did in 2001, or if he doesn’t then he should explain why he no longer does so.

Mr Goh Chok Tong revealed in the book “Men in White: The Untold Stories of the PAP” (SPH 2009) that former National Development Minister S Dhanabalan left the Cabinet in 1992 because he was not comfortable with the way the 22 had been dealt with in 1987.

“At that time, given the information, he was not fully comfortable with the action we took…he felt uncomfortable and thought there could be more of such episodes in the future…he’d better leave the Cabinet. I respected him for his view,” Mr Goh said.

Mr Dhanabalan, being a member of the Cabinet who was involved in the decision to arrest and detain the 22 workers, should also explain why he left the Cabinet and whether it was because of his discomfort with the action the government had taken against the detainees, as ESM Goh explained. More importantly, Mr Dhanabalan should also explain why he was “uncomfortable” with the government’s actions.

Being a minister in the Cabinet at that time, it is his responsibility to speak out if he had felt “uncomfortable” with the way the government dealt with the alleged “conspirators”. As a public servant in a senior position then, he owes it to the public to disclose and explain his reasons for his resignation from the Cabinet.

In 1991, Mr Walter Woon, who would later assume the post of Attorney-General, said: “As far as I am concerned, the government’s case is still not proven. I would not say those fellows were Red, not from the stuff they presented. I think a lot of people have this skepticism.”

Another piece of the puzzle is perhaps from the book released a few years ago by Cheong Yip Seng, who was in 1987 the editor of the Straits Times, the main newspaper with which the government put across its case against the “Marxist” detainees.

The book, “OB Markers”, had – conspicuously and inexplicably – avoided mentioning the “Marxist conspiracy” episode in its entirely.

Not a single word of the incident was written by Cheong in the book, which was touted to be a tell-all of his time with the newspaper. The “Marxist conspiracy” episode is “erased out” of the book, writes former TODAY editor, PN Balji.

What is it about the episode that Cheong finds so ultra sensitive that he is not able to pen a single word about it even after more than 2 decades?

A clue of the reason could be gleamed from the journalists who had worked at the Straits Times at the time.

Bertha Henson, a former associate editor with the Straits Times, and was involved in the coverage of the arrests in May 1987, at a time when she was a rookie reporter, revealed in 2015 how 1987 was “a terrible period when journalists twiddled their thumbs because an editorial decision had been made to simply run material from the Internal Security Department in full.”

Read that sentence again – it is an indictment of the ISD and the ST itself for allowing its pages to be used by the intelligence services.

“There was to be, in journalistic parlance, no value-added reporting,” Ms Henson said.

“We were not to ask questions of anyone nor can we do what we usually do with verbose reports – write it journalistically,” she explained. “I was too low in the hierarchy – and much too green – to give vent to my views. We did what editors, who presumably were better-informed than we were, told us to do – which was nothing.”

As for her own views of the arrests themselves, she said:

“Truth to tell, I have never found the ISD’s reasons for the arrests convincing. What Marxism? What liberation theology? The detainees seemed to be a bunch of people who wanted to do good… Were their actions really subversive? If so, plenty of groups today should be locked up by the ISD for doing more or less what the “conspirators’’ did.”

Ms Henson was not the only one in the Straits Times who have voiced doubts about the government’s claims.

Ms Henson’s former colleague, Chua Mui Hoong, the current Opinion Editor at the newspaper, had said in her 2012 book that “circumstances surrounding the arrest of the so-called ‘Marxist conspirators’ and the aftermath are another instance of public policy which calls out for further study.”

There is thus enough doubts – not by activists or the ex-detainees themselves – but by officers of the establishment and journalists of the government’s own newspaper, for a special commission to be summoned to look into the case, and to bring resolution to the affair once and for all.

And the 30th anniversary of the arrests is as good a time as any to do so.

The government has always touted itself as one which adheres to facts, which practices righteousness and fairness, and which has the highest integrity.

If so, there should be no reason why it would not want to convene a special commission to look into the facts of the “Marxist conspiracy” and bring closure to this – in the words of poet Alfian Sa’at – open wound.

But perhaps the best evidence that the case against the ex-detainees was a bogus one are the words of the prime minister at the time, Lee Kuan Yew. When challenged to put the detainees on trial and evidence against them put forward, this was what he said:

“A striking public confession of disbelief and open challenge to the Communist conspiratorial template being imposed on the Tan Wah Piow-Marxist Conspiracy activism came from the Minister of State for Education, Tharman Shanmugaratnam. He was one of the so-called ‘Super Seven’ new PAP entrants who were made ministers almost immediately after the 2001 General Elections. Yet he stated for the record that he had been directly inspired to go into politics by the political imprisonment of Tan. Deeply disappointed with the PAP and in search of alternative political and economic models, he had started reading Marxist literature, made friend with leftists and opted to go to the London School of Economics because of its left-leaning reputation.

“In London, he attended activist meetings and debates and joined ranks with Tan to promote study groups among ‘anyone who looked vaguely Singaporean or Malaysian’. When he returned to Singapore in 1982, his passport was impounded and he was questioned by the Internal Security Department. During the May 1987 Marxist Conspiracy, he was interrogated day and night for a week but escaped detention. He disagreed with the Marxist Conspiracy arrests and put on public record that ‘although I had no access to state intelligence, from what I knew of them, most were social activists but not out to subvert the system’.”

– “The scripting of a national history: Singapore and its past” by Lysa Hong.