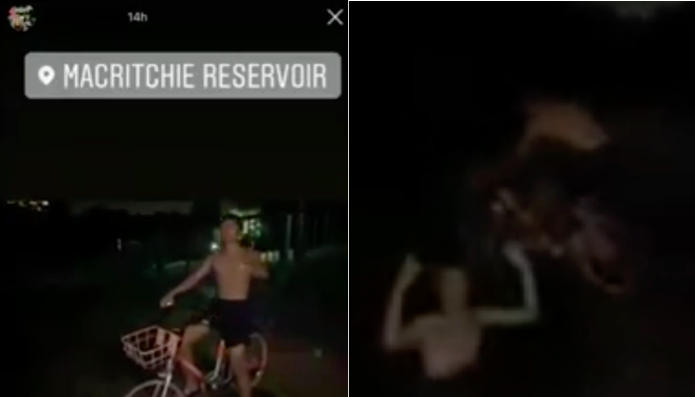 A video of two youths taking a night-time dip in MacRitchie Reservoir on May 8 has gone viral on social media and WhatsApp Messenger.

The 10-second clip shows one of the youths posing for the camera before he rides a bicycle into the water, while another youth is already wading in it.

A third youth is presumably doing the filming.

The video had a tag of MacRitchie Reservoir as the location.

It is unclear who posted the video on Instagram, the account where it originated from is now private.

After the video was circulated, the Public Utilities Board (PUB) made a police report. The national water agency said in a statement on Friday (May 15) that it was aware of the incident.

According to a STOMP article, the PUB said: “Based on the footage retrieved from our CCTVs, a few boys were seen trespassing the gated pontoon area at MacRitchie Reservoir on May 8 and swimming in the waters.

“We have filed a police report and provided the CCTV footage to the police for investigation.

“Swimming is prohibited in all reservoirs as local catchment water is a source of our water drinking supply, and it is dangerous to swim in these open waters as it is easy to misjudge the depth of the water. Swimming at night is even more dangerous due to limited visibility.”

There are prominent signs to inform the public of this and CCTV cameras are installed to enhance surveillance, said the PUB. It also noted that all its reservoirs are closed during this circuit breaker period.

It is not known how soon the PUB became aware of the incident and how many security guards and rangers are on duty around the reservoir. /TISGFollow us on Social Media