You think PAP care if increased parking charges will increase cost of living for Singaporeans?

On 30 June, HDB and URA jointly announced that public car park charges will beincreased by a whopping 20% from 1 December.

20% increase for public car parks is OK with PAP

Up to 26% increase for HDB residents

The soon-to-be increased charges, and more akan datang, shouldn’t surprise anyone: PAP needs to recover the cost of all goodies dished out to our pioneer generation as well as to buy voters.

By increasing costs now, it can then wayang and offer more subsidies and grants “to help citizens” pre-GE. This MO for almost all elections never failed to win over silly voters.

Was this increase planned some time back? The answer is clearly no. Why print millions of parking coupons to be unusable in December 2016?

Just last year, HDB planned to use parking coupons until 2021

So why did PAP suddenly feel the need to collect more revenue after it had only recently started charging vehicle owners visiting parks and beaches? Need millions more to promote paper generals, scholar colonels or stat board directors? Or to help pay for the construction of mechanised parking?

What happens if Lift A, B, C and D break down at the same time due to power fault, again? 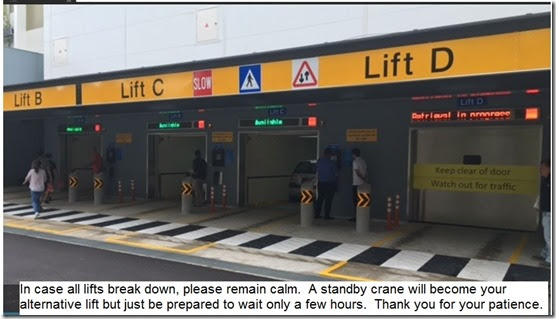 That HDB has consistently profited tens of millions from car park maintenance is a fact. Any justification to profit even more is self insulting.

The reason – their fees are pegged to public rates and would be raised in tandem with the impending hike. “In 2002, when public parking prices were last hiked, private operators raised their fees too”.

Once PAP has finalised its planning to generate more revenue, nothing can change its mind. Will even 1% of vehicle owners organise a protest rally at Hong Lim Park to register their unhappiness? No, most will just KPKB and suck thumb right?

The disposable income of average income vehicle owners will be reduced and the increased costs for business will ultimately trickle down to consumers. But does PAP care? Why should it even bother when it has the mandate from 70% of mostly silly Singaporeans who had voted to screw themselves in the first place?

Singaporeans should expect more of the same skyrocketing costs as we are still years from the next GE. History has shown that PAP will start taking citizens seriously, albeit temporarily, only when its interests are at stake.