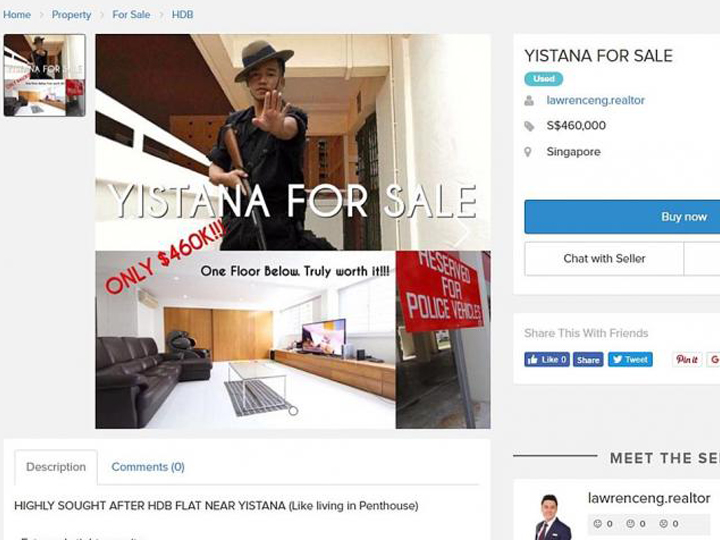 One property agent tried milking President Halimah Yacob’s decision to continue residing in her apartment at Yishun Avenue 4 instead of moving to the Istana – the official residence of the nation’s head of state – for every penny it’s worth.

That price does not just afford you a new apartment and bragging rights – buying the unit will also give you additional benefits like 24-hour surveillance due to its close proximity to President Halimah’s unit.

The advertisement, which was posted online on PropertyGuru and Carousell, quickly went viral but it appears that ERA Singapore has prohibited Ng from calling the unit Yistana any longer, according to an updated Carousell listing by Ng:

The unit owner, 35-year-old civil servant Mr Wong told reporters that he had plans to sell the unit, in which he has lived for more than a decade, even before President Halimah’s bid for presidency:

“We already had plans to sell the unit before any names even came up for the presidency. We’ve met Madam Halimah a couple of times and she’s very friendly, always being the one to start a conversation.”

Interestingly, the “Yistana for sale” listing came hot on the heels of complaints by Yishun Avenue 4 residents that President Halimah’s decision to stay at her jumbo flat has inconvenienced them:

Meanwhile, property agents have commented that it is unclear whether the President’s continued presence in Yishun will affect property interest in prices in the town. 28-year-old Singapore Estate Agency agent, Alex Zhan, told reporters:

“Nothing much has changed so far in terms of interest and prices are unlikely to be affected by the President of Singapore living in Yishun. It should be picking up soon, but that’s mainly because of other factors such as the usual supply and demand cycle.”