Social media influencer Xiaxue’s complaints about the way the Workers’ Party (WP) runs the Aljunied GRC estate she lives in has drawn mixed reactions online, with netizens questioning her motives for publicising the issues on social media.

On Tuesday (6 Oct), Xiaxue – whose real name is Wendy Cheng – claimed that the Workers’ Party (WP) compared Aljunied GRC unfavourably to wards held by the ruling People’s Action Party (PAP) and claimed that her housing area is in a “destitute state”, in her Instagram stories.

The vlogger, who is a self-described People’s Action Party (PAP) supporter, has criticised the WP in the past but claimed that her complaints have nothing to do with her political views.

She added that she did not want to raise this matter online but decided to do so when her MP, WP chairman Sylvia Lim, did not respond to repeated complaints about the poor condition her Housing Development Board (HDB) block is in.

In her stories, Xiaxue shared photos of a damaged void deck ceiling after a chunk of the concrete dislodged and fell onto the ground. She also shared that exposed wires were secured with cable ties and that the concrete floor of the corridor outside her unit is also damaged.

The vlogger took issue with the cracks on certain parts of the HDB facade and the fact that these cracks are painted over in a colour that does not match the rest of the building, as well. She also complained about peeling paint and claimed that she has spotted rats in the vicinity, aside from expressing concerns about a pipe that appears to be leaking some kind of dark green substance.

On Wednesday (7 Oct), Xiaxue revealed that the issues she flagged at her block were rectified that same afternoon. Both the damage to the concrete outside the unit and the hole in the void deck ceiling were patched up. Posting photos of the repairs, the influencer wrote in her stories:

“Today workers came to fix the broke concrete outside my unit. So I guess they can be efficient if they want to…Wasn’t so hard was it? Why take so long to do zzz…Finally. Very fast suddenly after complaining it’s a miracle lol…Today the WP people must have been like “f!@#ing suay why she must stay at our estate” lol”

Netizens responding to the influencers stories were largely divided. Some understood her point of view and said that Ms Lim or a representative of the town council should have responded to her initial complaints. Others felt that the disparity in funding the WP receives to manage its town council, compared to the funding PAP wards receive is to blame, for the disrepair.

Some felt that her block could just be old and said that these issues are seen in other older estates run by the ruling party, with at least one netizen asserting that he is also a constituent of Ms Lim but has not encountered the issues Xiaxue described. Still others put little stock in Xiaxue’s claims and felt that this was just another publicity stunt: 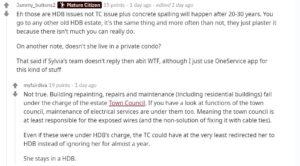 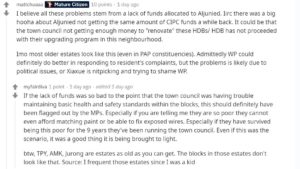 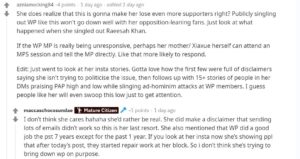