Home News Woman with “strong foreign accent” acts like she was hit badly by...

Woman with “strong foreign accent” acts like she was hit badly by car; flees when driver calls the cops 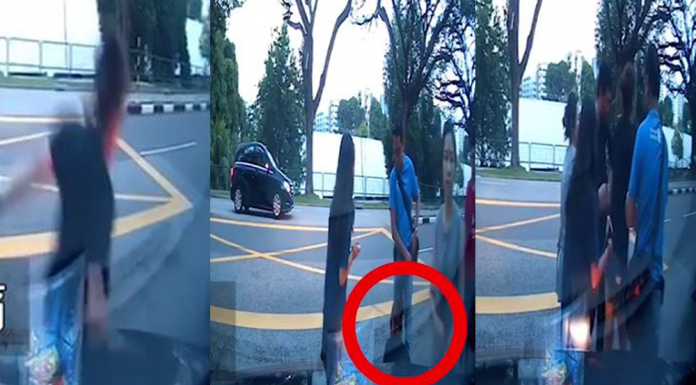 A woman allegedly pretended to be badly injured by a car that had been moving forward slowly, only to flee when the driver called the police. The incident occurred around 7pm last Sunday, 18 Mar, at the carpark beside Depot height Shopping Centre.

The driver, Ms Xu, told the Chinese daily that she was slowly driving past the carpark gantry and was about to cross a speed bump when she “hit” the woman who appeared to be in her 20s and spoke Chinese in a foreign accent.

The woman collapsed in the car and appeared to be in tremendous pain when Ms Xu ran to check on her. Suspicious because the level of pain the woman appeared to be experiencing did not match the impact of the collision, Ms Xu informed the woman that she had called the police and that she would be sent to the hospital.

Ms Xu informed the woman that she would let the police handle the matter and asked for the woman’s passport and work permit details, suspecting that the woman was a foreigner. She added that the incident had been captured on her dashboard camera:

This was when the woman’s demeanor abruptly changed, according to Ms Xu: “She suddenly looked frightened, then stood up and left.”

Ms Xu pursued the woman and asked why she was fleeing. The woman allegedly claimed that she wasn’t hurt and that she did not want to pursue the issue: “She took out her phone and made a call to someone and sounded like she was complaining to the person on the other end of the line.”

Ms Xu still lodged a police report over the matter and told reporters that she is sharing the footage of the incident and her story to help other drivers be wary when encountering similar situations.

Singapore — The last two weeks of December saw at least 469 OCBC customers fall victim to phishing scams, with a total of S$8.5 million lost from their bank accounts. Ho Ching, a Director of Temasek Trust, shared the...
Read more

Singapore — The fight for road space between motorists and cyclists can be a very real thing in Singapore, with some have even getting...
Read more

Singapore — People in different parts of the world, including Singapore, are finding themselves getting re-infected with the coronavirus responsible for the current pandemic.  There...
Read more

‘Look! Such an inconsiderate act!’ — Woman shakes rug over balcony in Yishun

Singapore — A woman was caught on camera shaking her rug over a balcony to clean it, sparking criticisms among netizens over the 'selfish'...
Read more

Singapore — The fight for road space between motorists and cyclists can be a very real thing in Singapore,...
Read more

Singapore — People in different parts of the world, including Singapore, are finding themselves getting re-infected with the coronavirus...
Read more
Follow us on Social Media