The Independent Singapore News
Home News Featured News Woman vents her anger on the incumbents saying she has no trust...

“They were so busy planning for a covid election, they forgot all about the foreign workers,” said netizen Saraphine Ang

An older Facebook post of a netizen was recirculated on WhatsApp messenger yesterday (Apr 28), where she expressed her dissatisfaction and unhappiness with the incumbents.

She added, “They were so busy planning for a covid election, they forgot all about the foreign workers”.

When asked about a possible General Election amid the current COVID-19 outbreak, Prime Minister Lee Hsien Loong said that the Government needs to consider if it is possible for them to conduct an election at this time, among other factors.

“I think that we have to weigh conducting an election under abnormal circumstances, against going into a storm with a mandate which is reaching the end of its term. We have to make a decision on that,” Mr Lee said during a door stop (Mar 27) on the Resilience Budget at the Istana.

“I would not rule any possibility out” he added.

A General Election must be held by Apr 14, 2021, which marks the end of the term of the 13th Parliament.

Calling for Singaporeans to vote for opposition parties, Ms Ang wrote, “Don’t be blinded by the cash handouts given out by the government the past month or two. These are your own money, and these are monies they intend to claw back by raising GST”. 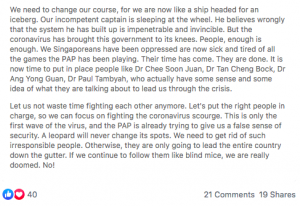 He said: “When you are sailing into a storm, you want to be certain who your captain is and that he will not be changed halfway. You want to make sure that he’s there together with you, working with you, guiding you through the storm.”

Using a similar metaphor, Ms Ang opined the opposite, “We need to change our course, for we are now like a ship headed for an iceberg. Our incompetent captain is sleeping at the wheel. He believes wrongly that the system he has built up is impenetrable and invincible”.

Concluding her Facebook post, she said, “If we continue to follow them like blind mice, we are really doomed”, and added, “It is now time to put in place people like Dr Chee Soon Juan, Dr Tan Cheng Bock, Dr Ang Yong Guan, Dr Paul Tambyah, who actually have some sense and some idea of what they are talking about to lead us through the crisis”. /TISGFollow us on Social Media