Woman out-perverts a man in MRT 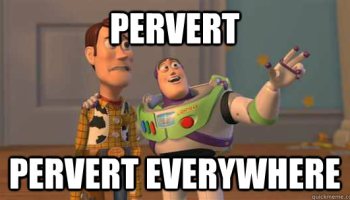 A Facebook user shared how she ‘out-perverted’ a man who was ogling her in the train. She wrote on 4 Aug that she did it to give the “creep a taste of his own medicine”. The incident happened on the East-West line. She mentioned that she at the seventh stop to her destination in Boon Lay when the incident happened.

The user said that the man not only ogled her, but also positioned himself in a manner that if the train swayed, he will brush against her. When she moved to a different location to avoid him, he also followed her to the other spot. This was when she decided to “out-pervert” him. She said that the experience left her feeling “empowered”.

—
SO I JUST OUT-PERVERTED A PERVERT

Long story, but I think you’ll enjoy it: I’m on the train and there are 7 more stations before Boon Lay. I notice that there’s this man standing in front of me who’s letting his eyes roam over my body and my face. He sees me looking at him and he averts his eyes, but they’re back on me within seconds. He has also turned his body so that if the train sways, he will easily brush against me.

People get off the train and I quickly move to the far corner where I can lean on the glass panel next to the doors. He has all the space in the world to himself now but NO HE COMES UP TO MY SPACE AND STANDS RIGHT AT THE POLE NEXT TO ME, EFFECTIVELY ALMOST CORNERING ME. And continues to stare.

I’ve had enough. There are 6 more stations to go. I decide to do something I’ve never done in my whole life.

I turn my body completely so that we are facing each other fully. He’s a little taken aback but probably quite glad because he gets a good frontal view. The thing is, I get a good frontal view too. I begin to stare into his face, and then let my gaze drop to his chest, his stomach, his pants. I stare intently at his pants, smile a little, and then continue checking out his chest.

He’s taken aback. By the 3rd station, he shifts his bag to cover the “sensitive” part of his pants. That’s okay with me. I continue to shift between staring at his face to his chest. He looks down at his chest a couple of times, perplexed that I would find it so fascinating. 4th station, his face is bright red and he’s rubbing his face with both his hands.

I think he might appreciate more eye contact so I begin to look at his face more. 5th station, he takes a big step BACK FROM ME AND CLOSES HIS EYES. Somehow he doesn’t want to look at me :((

Boon Lay station. He turns his back on me as he prepares to exit the train. I step up close to him with my backpack in front of me, and it brushes his butt gently.

That’s it. He is out of that train so fast and hurrying down the escalator before disappearing quickly into the crowd.

You, sir, picked on the wrong girl to disrespect and creep out tonight. YOU HAVE BEEN OFFICIALLY OUT-PERVERTED.

EDIT: So some people call me brave and some call me reckless, and I just want to add that I definitely knew I was taking a risk; I was doing my best to appear condescending rather than inviting, and I was also very aware of his body language in case this little experiment backfired on me. I may or may not do it again, depending on the person in question and the general circumstances, and I wouldn’t exactly encourage anyone to do this if you’re not sure of how well it will turn out (plus it’s REALLY not a pleasant experience to pretend to check out a pervert, albeit an empowering one when you turn his creepiness against him). The main point of this episode though was to give this creep a taste of his own medicine. And to reinforce the very overlooked fact that you don’t need to PHYSICALLY TOUCH someone to disrespect them, disempower them and cause them distress.Follow us on Social Media