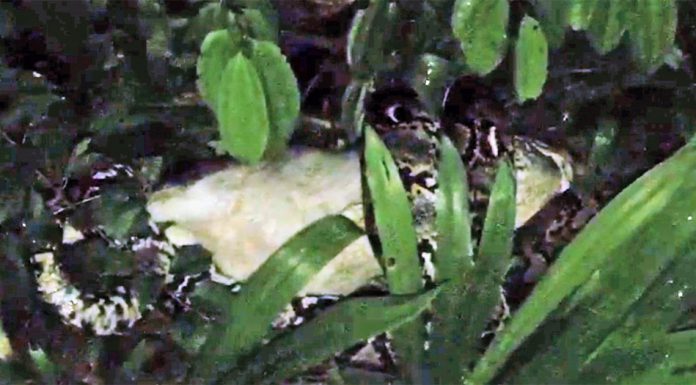 Ang Mo Kio residents were shocked to discover a python devouring a beloved neighbourhood cat on Tuesday, 23 Jan, between Blk 330 and 331 at Ang Mo Kio Ave 1.

One of the residents who saw the horrifying scene, 28-year-old Caesar Ho, took photos and videos of the snake swallowing the cat and uploaded it on social media:

Ho later told reporters that he was approached by another resident who was looking for a cat before they made the discovery:

“I was exercising at the fitness corner when a lady came up and asked me if I’d seen a cat around. She said it was a stray cat, but she had been feeding it from young and it was missing.”

While the pair were talking, Ho spotted another cat nearby fixated at an area covered in thick bushes. The lady he was talking to recognised this cat as the one that had grown up with the missing cat. She reportedly told Ho that the two cats often played with each other.

Ho and the lady approached the second cat to investigate what it was staring at when they discovered a massive snake in the bushes, that was allegedly “halfway” swallowing a cat. Ho added: “I went to look at it, confirm it was a python.”

Unfortunately, the python’s prey was the same cat the lady had been looking for. The lady grew distraught when she heard what had happened to the missing cat and was reportedly in tears. Ho recounted that she had to sit down.

Meanwhile, another bystander called pest control who arrived shortly after and assessed the situation. Ho said:

“They told me that the cat was dead and they cannot touch the snake. They have to wait for the snake to abandon the cat’s body or swallow it completely, otherwise they might injure the snake.”

Ho apparently waited for about two hours but neither the snake nor the pest control officers appeared to move off so he went back home. He reports that another resident told him yesterday that this is the fourth time a snake had been caught in the area in recent years.