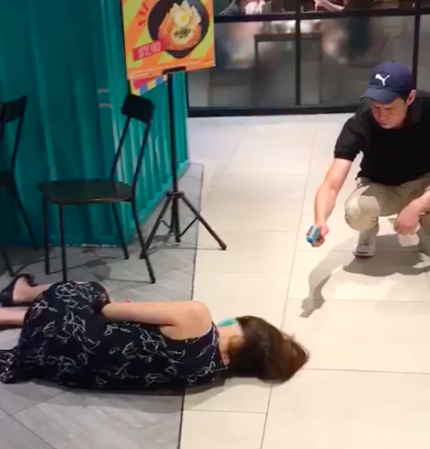 A video of a woman who fainted but was not helped by anybody made its way round Whatsapp Messenger and social media over the weekend.

The 30-second clip shows a woman, who is wearing a mask, lying unconscious on the ground in a mall in Clementi.

No one, however, helps her presumably because of Covid-19 fears.

A man in a blue cap then takes her temperature with an infrared forehead thermometer and tells the person doing the filming that it is 37°C.

The average normal body temperature is generally accepted as 37°C. Some studies have shown that “normal” body temperature can have a wide range, from 36.1°C to 37.2°C. A temperature over 38°C most often means that the person has a fever.

Despite the woman having a temperature considered normal, no one helped her.

Many netizens who commented on the video criticised the person who filmed it for not calling an ambulance or helping the woman. Others also said those who saw her could have got a pair of gloves and a mask from the restaurant nearby to help her.

Some others pointed out that, ironically, the man who took the woman’s temperature was not wearing a mask.