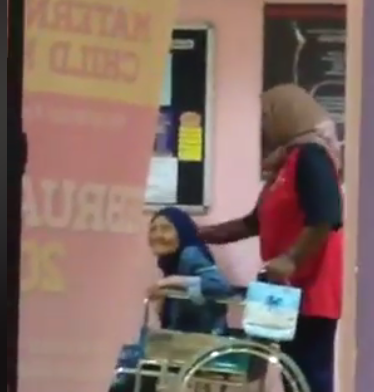 A video posted on the PerakWorld Facebook page shows a woman tapping on the head of an elderly person in a wheelchair.

The elderly person is hit a few times and is pulled behind as if to behave properly or not to speak by a woman in tudung.

The video is from Malaysia and the scene takes place in a public hospital. Nurses can be seen in their regular Malaysian hospital uniforms at their desk, while the person captures the bullying incident.

The page admin wrote: Do not treat your mom like that. Pity the old lady who must have taken good care of you when you were small.

Most of the comments were about handling the elderly during their most difficult times, when they are sick or when they have a lack of patience in the old age.

Most of the people expressed pity, while some expressed anger at the treatment of the elderly person at the hospital by a family member.Follow us on Social Media