The aftermath of the bribery probe was not pretty.

The company’s net profit subsequently took a hefty 72 per cent plunge, after the company acknowledge the corruption charges. Keppel Corp reported a net profit of S$217 million for the financial year of 2017 and revealed that the financial penalty that the corporation was slapped with, coupled with the legal, accounting and forensics costs amounted to S$619 million.

In a recent report, DBS Equity Research warned that Keppel Corp’s O&M annual revenue could drop to between $2 billion to $4 billion in 2019 if the firm’s order books continue to shrink and if its contract flows do not match expectations.

The scandal tainted the public’s views of the company and many especially excoriated the management of Keppel for not owning up to their offences earlier.

“Keppel’s journey in the last fifty years mirrors our nation-building story. You turned adversity into opportunity. You looked outward and broke new ground in external markets, businesses and technologies. You transformed yourself as the world changed, developing new capabilities and businesses beyond your original focus. Your success is also Singapore’s success as you contributed to our economic growth and international branding, and uplifted the livelihoods of many Singaporeans.”

Some Singaporeans responding to PM Lee’s speech questioned him about where his “moral compass” was, since he praised a company with the aftershock such a large scandal still looming over it: 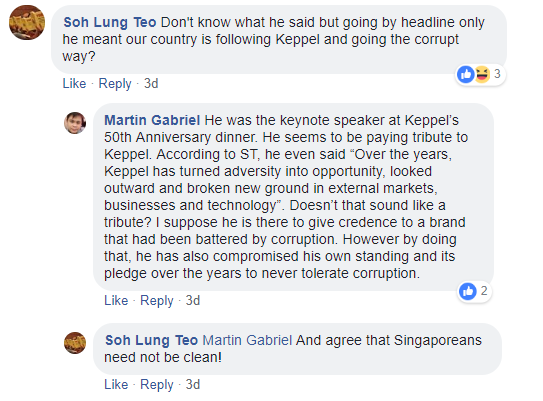 It must be noted, however, that the head of government did touch on the bribery scandal – in his own way. Seeming to lightly chide the company and advising Keppel Corp to uphold local values, PM Lee said:

“It is absolutely necessary for Keppel to go overseas, and to operate all over the world. Keppel could not be the company that it is, if it operated solely in Singapore. Yet it is equally necessary for Keppel to maintain high standards of integrity and performance, and keep its own operations and culture clean and transparent, even when operating in complicated environments where different norms prevail. We may not be able to convert the rest of the world to Singapore norms, but we must uphold Singapore norms and rules in our own system, wherever our business may take us in the world. When things go awry from time to time, it is important that the company is resolute in putting things right, as Keppel has done in the recent case in Brazil. It is not an easy path to tread. Other MNCs face the same challenges. But it is essential to maintaining Keppel’s, and indeed Singapore’s, reputation, built up with such enormous effort for so many years.”