The Independent Singapore News
International World When Trump met Putin, and how the Russian won the day

When Trump met Putin, and how the Russian won the day 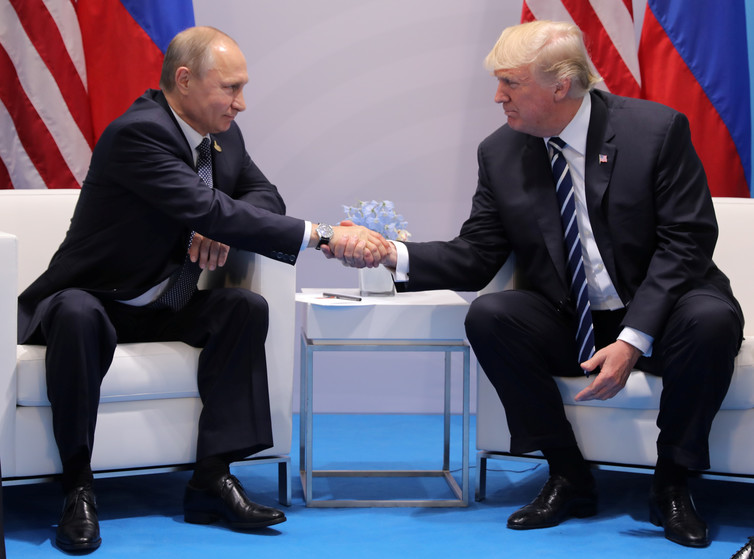 It was the meeting we’ve all been waiting for. US President Donald Trump and Russian President Vladimir Putin met on Friday during the G20 meeting in Hamburg, Germany.

The key question was whether Trump or Putin would emerge as the stronger leader, with most backing Putin’s ability to manipulate and control the exchange. Trump’s lack of diplomatic or political experience, and his unwillingness to prepare for the encounter, inspired very little confidence that he would walk away with any serious concessions from Putin.

The meeting was scheduled to take half-an-hour. In fact it lasted more than two hours, and an indication the two leaders found a significant amount to talk about. The only other people present were US Secretary of State Rex Tillerson, Russian Foreign Minister Sergei Lavrov, and two interpreters. The little we know of what was actually discussed has come from statements Lavrov and Tillerson gave to the press following the meeting.

Russian interference in the US election

Tillerson said Trump pressed Putin over Russian interference in the 2016 election, but seemed to accept his denial that Russia did any such thing.

President Putin denied such involvement, as I think he has in the past.

Tillerson said the White House was not “dismissing the issue” but wanted to focus on “how do we secure a commitment” that there will not be interference in the future.

The big question going in to the meeting was whether or not Trump would raise the accusation with Putin. While he clearly did, the ease with which he appears to have accepted Putin’s protestations of innocence, and his reassurance that it won’t happen again, is remarkable.

According to journalists’ reports on Twitter, Lavrov had a slightly different spin on Trump’s reaction to the issue. He said:

In light of Trump’s remarks in Poland the day before, when he called into doubt the reliability of US intelligence on the issue, this has further undermined the credibility of the US intelligence community. That Trump did this during a face-to-face meeting with Putin can only deepen the mistrust between the CIA and FBI have for the White House, and further damage morale.

It can also be read as a clear victory for Putin, who came away from the meeting without having to seriously address charges that Russia systematically engaged in what is a gross violation of the democratic integrity and sovereignty of another country.

There was a clear opportunity for Trump to use the meeting to pressure Putin over his continuing support for Syrian President Bashar al-Assad.

While any significant agreements over how to resolve one of the most complex conflicts in the region were highly unlikely, the two leaders did agree to support a ceasefire in an area of southwestern Syria. There were no other details, and Tillerson himself admitted that ceasefires in Syria have tended to fall apart very quickly.

While Russia and the US have a shared interest in fighting Islamic State in Syria, they disagree over the almost every other aspect of the conflict, particularly the future of Assad and the role of Iran.

Trump has recently ratcheted up to anti-Iranian rhetoric and it seems the Russian relationship with Iran could become a significant point of conflict between the US and Russia in the future.

No transcript of the meeting is available so it’s impossible to know exactly what was discussed here. But if Putin was not pressed on these points, it is certainly a missed opportunity.

While both Lavrov and Tillerson highlighted the shared interests the two countries have, neither Ukraine nor the ongoing nuclear crisis in North Korea could be counted among them.

North Korea’s testing of an intercontinental ballistic missile guaranteed that it would be high on the list of issues that would be discussed. Russia has contradicted the consensus among the other G20 leaders over the missile’s range, and blocked a resolution by the UN Security Council calling for “significant measures” in response to the test.

So, what do we make of this highly anticipated meeting?

With very little detail about what was actually discussed, and with the narrative firmly controlled by Lavrov, Trump would seem to have gained very little while conceding much.

Putin has come away with an implicit agreement to move on from the question of election meddling, without promising more than “dialgue” on Ukraine, no agreement on how to deal with North Korea, and no real movement on the horrific human tragedy in Syria.

Along with Tillerson’s affirmation that the two leaders shared “a clear positive chemistry”, it’s hard not to recall George W. Bush’s claim to have seen into Putin’s soul, and conclude that Putin has once again expertly played a US president.