Koh Pok Koon, senior minister of state, recently said that the levels of real wage growth have become unsustainable as they’ve outpaced the growth of productivity. The latest statistics show that while productivity only grew by 1.1 per cent, real wages have gone up by 1.9 per cent from 2011 through 2017. 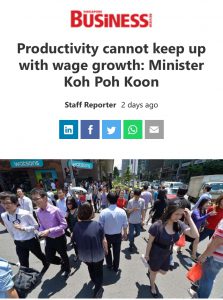 Mr. Koh said that the increase in real wages should be at par with the growth of productivity, because “if real wage growth outstrips productivity growth for an extended period, businesses will be at risk of losing their competitiveness and potentially be forced to scale back or close their operations.”

But he also pointed out that sectors have differed in their pace of real wage growth, with certain sectors such as service industries or construction seeing real wages increase faster than the rate of productivity for the same time period (2011-2017). This, he said, was due to labor marker tightness.

The government’s most recent message about real wages and productivity seems to echo something that Prime Minister Lee said in the past.

In 2012, PM Lee warned of just such a potential situation – that higher wages are not accompanied by higher productivity. PM Lee described it as “dangerous”.

On Labour Day in 2015, PM Lee said that while wages were actually on the increase, there is still the possibility that they could stall or even be scaled back, should productivity rates not be able to keep the same pace of growth. He further cautioned Singaporeans to get accustomed to the notion that the economy would grow slowly. 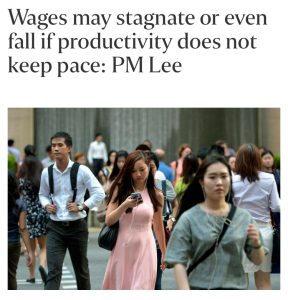 “We have to get used to slower growth than before, because our economy is more mature, and we have tightened up on foreign manpower.”

For his May Day message that year, Mr. Lee said that the growth of productivity was going too slowly, because Singapore’s “previous strategy is reaching its limits,” as well as an unstable world economy.

Similar to what Mr. Koh said recently, Prime Minister also said in 2015 that stagnant productivity while wages were rising was unsustainable. “Wages have been rising in the tight labour market, but this is not sustainable. If productivity continues to stagnate, after a while so will wages, which may even fall back,” he said.

However, just six months later, in October 2015, Deputy Prime Minister and Finance Minister Tharman Shanmugaratnam announced that the country was “well on track” in boosting the growth of productivity. Mr. Tharman said that from the years 2009 to 2014, the country was “at the upper end of the 2 to 3 per cent range,” a range that had been the administration’s goal.

He said, “We are getting endless repetition of the fact that productivity has not worked. Actually we are very much on track,” citing that productivity then, in October 2015, “significantly higher than when we started in 2009.”

In fact, in the previous year, 2014, Mr. Tharman actually announced that over decades, Singapore had taken strides in narrowing the the productivity gap with advanced economies. He pointed out that in 1980 Singapore was only at 40 per cent of the productivity levels of the United States, but in 2014, that number had gone up to 70 per cent. 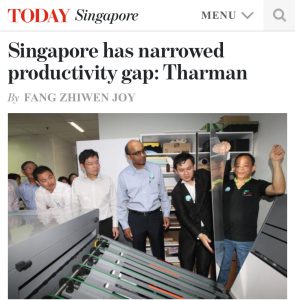 Mr.Tharman was proud of the fact that the government had taken the more challenging and inclusive route of adding jobs, rather than the easier step of cutting down on their number. In its strategy to increase productivity, the government had amended its foreign worker policy and extended assistance to companies, particularly to the Small and Medium Enterprises that needed it most.

All this begs the question, what is really going on? Why is Singapore unable to close the gap between wages and productivity? And why is the government sending out mixed messages about productivity?Follow us on Social Media