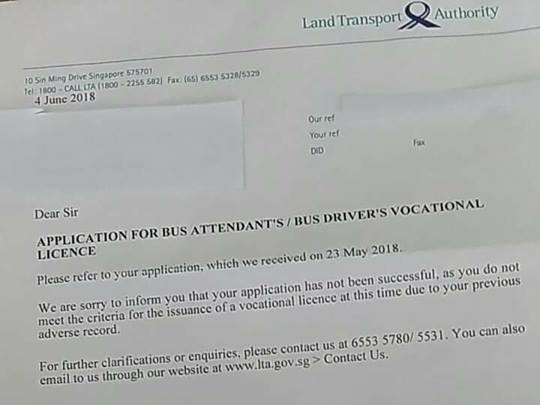 The Land Transport Authority (LTA) has rejected an ex-offender’s job application due to his “previous adverse record.” The government body’s call comes after the Singapore Police Force rejected another ex-offender’s application for a security officer’s license, because he is “not a fit and proper person” given his previous conviction.

In that case, it was reported that the ex-offender was a former infantry regular in his 30s who served six months in prison for allegedly assaulting a construction worker who accosted his wife – an attack that caused the worker to suffer from a fractured nose and jaw.

In this latest case, the ex-offender had applied to the LTA for a bus attendant’s/bus driver’s vocational license only to have his application rejected due to his prior record.

Facebook user Jai Kali Singh who shared a photo of the rejection letter, dated 4 June 2018, revealed that the ex-offender is a mere 25 years old and wrote on social media:

“At first SPF now LTA also do not want singaporean earn decent living Appy for vocational get rejected becauze of record. How many foreigners driving grab and sbs bus have you check whether they have clean record or not.

“Its is getting harder and harder for Singaporean to survive in their own land. This person is only 25 years old with years ahead but the government kill him here. No mercy want to turn over new leaf also cannot.”

The picture of the letter prompted some netizens to question the point of second chance programmes like The Yellow Ribbon project is:

Others opined that LTA should be given the benefit of the doubt in this case, since they are not aware of what exactly the applicant’s prior record is: