The Independent Singapore News
Home News Featured News What did Lee Kuan Yew give up for the sake of Singapore?

What did Lee Kuan Yew give up for the sake of Singapore? Some Singaporeans on social media have been circulating an answer to a Quora thread trying to explain what Singapore’s founding prime minister, the late Lee Kuan Yew, gave up for the sake of the nation.

Earlier this month, Quora user J Cheng, attempted to answer the question “What did LKY give up for the sake of Singapore?” on the question-and-answer platform and opined that the late elder statesman sacrificed a lucrative career as a lawyer for the sake of the country.

“The late Mr Lee Kuan Yew could have lived a relatively carefree life. As a top student from Cambridge, he had his pick of countries to emigrate to e.g. UK, US etc. He could have also made a lot of money in private legal practice. Instead he choose to go back to Singapore. Back then, the situation was very different. It could be argued that Singapore was a basket case.

During that period, Mr Lee Kuan Yew and a few of the old guard carried a pistol for personal protection. This was necessary as the communists and Malay supremacists threatened their lives. Mr Lee made Lee Hsien Loong promise to look after his family when he went to meet with The Plen (Communist) and Malay leaders as he was concerned that he would be killed.

However, together with the old guard, he laid the foundations of Singapore and is immortalized as one of the great leaders of our time. RIP Mr Lee Kuan Yew.”

Another Quora user, Deborah Su, felt that Lee Kuan Yew gave up family time to build Singapore. She wrote, “Time spent with family. The time he took to build Singapore, is all the time he did not spend with his kids. No one can put that much time and effort in politics and still have the energy with what remaining time he had for family. Something always has to give.”

Two other Quora users attempted to answer the question on what Lee Kuan Yew gave for the sake of the country but their answers were flagged on the website for being inappropriate or needing improvement: 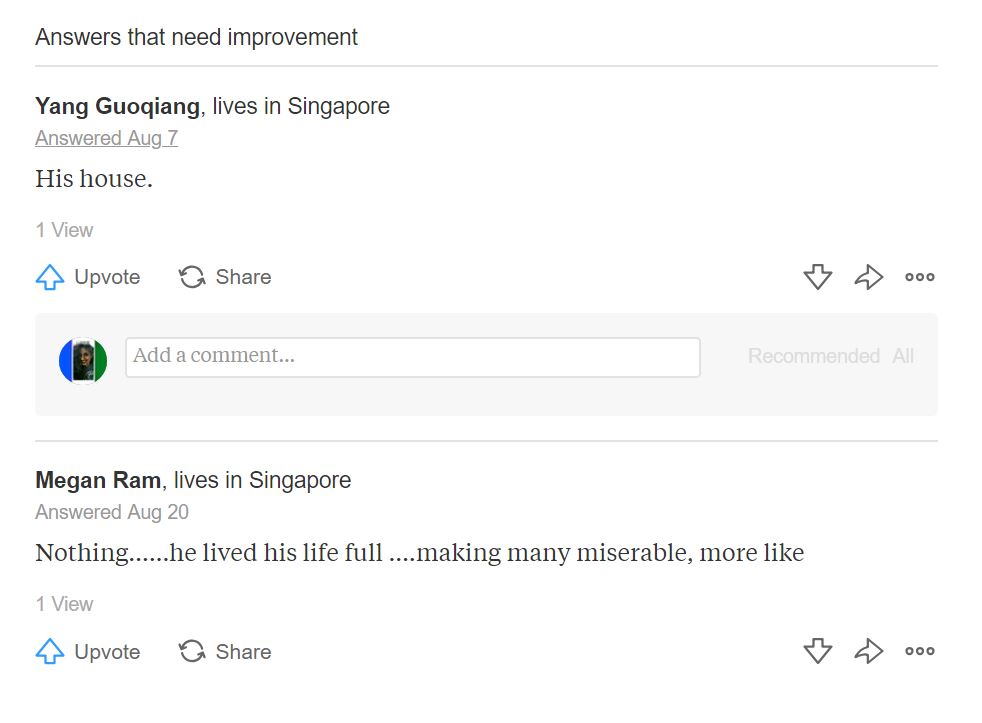 While it may be interesting to discuss what the late politician gave up for the sake of the nation, some on social media have also felt that it is crucial to discuss what Lee Kuan Yew gained from running Singapore.Follow us on Social Media