The Independent News
Home News "What about those who sleep in Parliament?" - Netizens question jail terms...

“What about those who sleep in Parliament?” – Netizens question jail terms for security guards who sleep on the job Hundreds of netizens have expressed their displeasure with the harsher punishments that have been introduced for security officers who sleep on the job.

From this year, security officers who sleep on the job, slack off or come to work drunk face a fine of up to $2,000 and/or a maximum three-month jail term. According to the national broadsheet, “these offences may also be compounded by a fine, in lieu of prosecution.”

Before 2019, local law enforcement could not punish errant security officers who would typically receive warnings, suspension or termination by their respective employers if they are caught behaving unprofessionally.

The Ministry of Home Affairs explained that the police can now take action against errant security officers since the security officer’s code of conduct is contained in the Schedule of the Private Security Industry (Conduct) Regulations. An MHA spokesman added:

“MHA will strengthen the penalties for selected breaches that pose a risk to public safety and security, to further underscore the importance of upholding professional standards in the security industry and deter errant behaviour.

“Breaches that will be made an offence include sleeping or consuming alcohol while on duty, being absent from their post without a valid reason, or failing to respond promptly to any request for assistance by any person suffering injuries or damage or loss of property, among others.”

While the harsher penalties for security officers are seen by some as the latest move in the Government’s plan to enhance the standard of the security industry here, some others have felt that a hefty fine or jail for sleeping on the job is ridiculous.

Noting that many of these security officers lead tough lives, several netizens asked why parliamentarians who sleep in parliament are also not penalised: 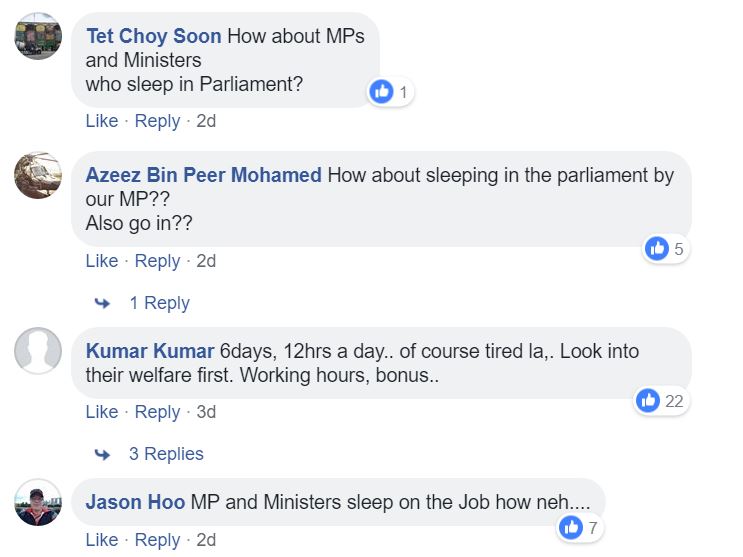