Ivan Tan and his new bride’s wedding photos spoiled what should have been the happiest day of their lives. They posted the pictures on Facebook, writing, “WHAT A HORROR.”

On Tuesday, August 14, three months after they got married, the couple decided to upload the photos on Ivan’s Facebook page, tagging the photographer with the ironic tag, “Credits to Reflection Photography.”

Ivan wrote that they had paid around $2,700 for a video, photo and Photo Booth package. The couple said they took responsibility for this “GRAVE mistake” because they should have taken a closer look at the company’s portfolio.

Among the couple’s complaints are the following

Ouch. Reading Ivan’s post, you can feel the pain that the couple went through. But the couple said at the end of their post that they just wanted to vent their bad feelings concerning the photos, and to tell other couples to “be aware” and to “choose with care.” They did not demand that the photography company return their money, though they asked such pointed questions as, “Do they even know how to use the camera? If one dont (sic) even have the knowledge of camera setting adjustment with respect to the environment, do you even call yourselves photographers?”

Moreover, according to the couple, while the head photographer for the company did agree to a discussion of the pictures, he only responded by saying that the photos were all right, that they had never experienced this kind of reaction from clients, and finally, he insisted that the photographer that had been assigned to Ivan and his bride was “the TOP photographer with more than 10 wedding shoot experience.”

The couple did not mince words about the photographer, writing, “Totally lacking the basic skills of what a photographer should have. Angles,lighting, directing your subjects to get the best shots.
Our photographer did way lesser than the base minimum of the above,” and what is worse, “Instead of being apologetic for their incompetency, they criticized the subject(My Wife and I) and the environment for the bad photos.”

Well, the internet has spoken —in favor of the couple. Quite overwhelmingly, in fact. The post has been shared more than 2000 times in less than 48 hours and has gotten almost 900 comments. And the commenters agree with Ivan and his wife on the quality of the photos, or lack thereof. 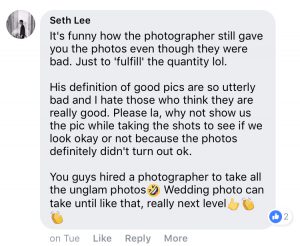 Some offered to help out the couple either re-shoot their photos, or edit them. 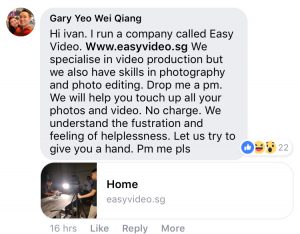 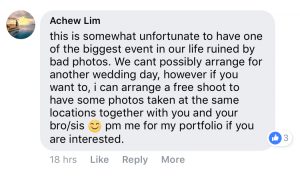 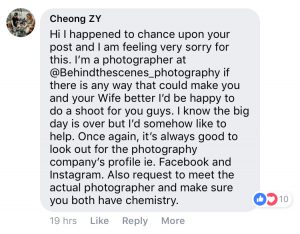