A video from one Housing & Development Board (HDB) housing unit caused many Singaporeans alarm when they saw that the walls were stuffed with newspaper. The homeowner posted the video on Facebook on August 17, and it was subsequently shared over 1,000 times.

However, the HDB has since clarified the matter, and the original poster has taken the video down. The netizen had uploaded it for the purpose of warning others against dishonest contractors who would use such material, and thereby compromise the safety of homeowners. The netizen captioned the video with, “Unscrupulous contractors playing with peoples lives by trying to cut costs. Please beware.”

Commenters on the video encouraged the poster to report the contractor’s dangerous building practices.

Indeed, for people’s own safety, guidelines issued by the HDB says that anyone who wishes for renovations on their unit should get a contractor only from the Directory of Renovation Contractors (DRC). As for the demolition or reconstruction of walls, the HDB needs to issue their written approval first, to make sure that the structural integrity of the building may remain intact. Otherwise, this may possibly pose a threat to residents of the building.

The HDB has contacted the owner of the apartment. They explained that the newspaper-stuffed walls resulted from the time when windows were installed in the balcony of the flat in 1999, and the owner discovered that the contractor he hired for installing the windows had used newspapers as stuffing only recently, as he had decided to change these windows.

The HDB post assured “that there are no structural safety concerns” and that a solution has been found for the walls.

Furthermore, the post also indicated that an investigation has been launched by the HDB and that action would be taken if the contractor is discovered “to be errant.” 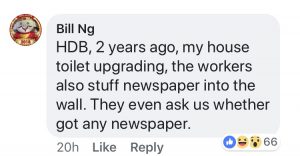 Others asked the HDB for transparency on the investigation.

Other netizens commended the HDB for their swift action.