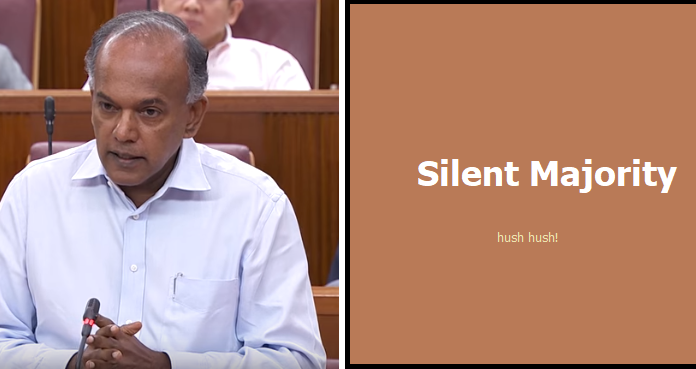 Mr K. Shanmugam said ministers have the ultimate decision-making responsibility and must not be sidetracked by “the vocal minority”. Who are these people who are capable of sidetracking our Cabinet? Do they really exist or are they just a figment of the government’s paranoid mind, as it finds it harder to garner support for its policies in the new social media era?

The Law Minister was referring to the sentiments expressed online when the Public Order and Safety (Special Powers) Act (POSSPA) was proposed which he said gave the impression that there was “a lot of opposition” to it.

In the end, there was the opposite   –  strong public approval. Citing a recent survey by government feedback unit REACH, Mr Shanmugam said 82 per cent of Singaporeans polled said they agreed with POSSPA. The survey, which polled 1,038 citizens and permanent residents, also found that 76 per cent of respondents agreed that POSSPA was necessary to enable the police to handle major security incidents effectively, while 67 per cent thought it was reasonable for the police to have powers to stop individuals from taking or sharing pictures or videos of ongoing security operations.

This meant government engagement with members of the public had been effective. They could see the importance of the legislation which was essentially to give the police the powers to do their job undisturbed. So, why was the government so bothered by this vocal minority that it could be so easily sidetracked? Shouldn’t dealing with vocal critics be part and parcel of an administration’s routine?

What would we rather have – Singaporeans who are always articulate enough to offer their views, albeit in a more kurang ajar tone than considered acceptable, or Singaporeans who have absolutely no view on anything?

I hope Singaporeans do not fall into the second category which is nothing less than dereliction of their civic duty. It can lead to national disaster.

Wikipedia: “The silent majority is an unspecified large group of people in a country or group who do not express their opinions publicly.

The term was popularised by US President Richard Nixon in a November 3, 1969, speech during the Vietnam War period in which he said, ‘And so tonight—to you, the great silent majority of my fellow Americans—I ask for your support.’ “

Sadly, when these Americans should have objected, they kept silent.

At the risk of oversimplifying the matter, as a result, I would say the number of people who died in the Vietnam War casualties were:  58,220 US military, as many as two million civilians on both sides and some 1.1 million North Vietnamese and Viet Cong fighters and between 200,000 and 250,000 South Vietnamese soldiers.

Earlier, the silent majority in 1940s Germany also did nothing and aided the rise of the Nazis which led to the outbreak of World War II.

What’s so great about keeping silent?

Indeed, it will always be the vocal minority who will make the difference in any open society. Listen to these Singaporeans more carefully.  They are not keeping their views to themselves and letting you do an unproductive guessing game.  They are not giving you feedback you have been getting ad infinitum from a sycophantic machinery. They are giving you real feedback, frank opinions which no government-sponsored survey will ever give you. Numbers alone cannot offer you the real emotional feel of a verbal blast in the ear.

Instead of labeling critics as a vocal minority and regarding them as some sort disease, I would accept or welcome them as the best antidote to complacency and self-delusion. Bitter perhaps but necessary for survival.