When the user said that she does want to ask Sophie out on a date, BitLife asks her to confirm the decision as the app then goes on to assert that dating someone of the same sex is illegal the country 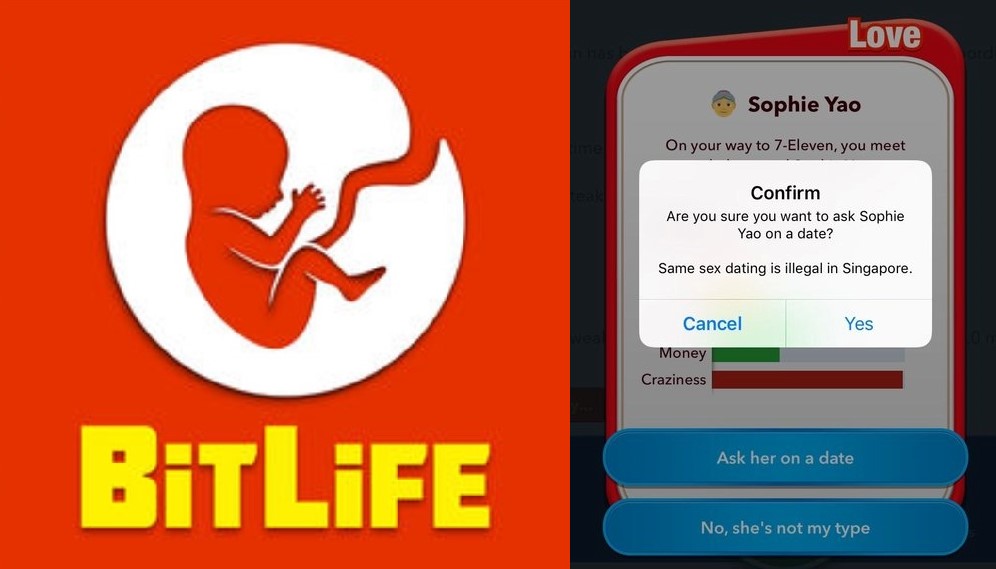 Apple and Android virtual reality application, BitLife, appears to have told some users that “same sex dating is illegal in Singapore.”

BitLife, which calls itself a “Life Simulator” is a text-based mobile application that starts users off as random characters at birth before allowing users to make decisions as their virtual life progresses. Users make decisions for their characters on their love life and matters such as drugs, crime and more.

On its App Store download page, BitLife states: “How will you live your BitLife? Will you try to make all the right choices in an attempt to become a model citizen sometime before you die? You could marry the man/woman of your dreams, have kids, and pick up a good job along the way.

“Or will you make choices that horrify your parents? You could descend into a life of crime, start prison riots, smuggle duffle bags, and cheat on your spouse. It’s all up to you…”

Recently, Reddit user u/MadsMads87 posted a picture of a BitLife scenario she encountered to the BitLife App subreddit. In the scenario, the user – who appears to be a female – has to decide whether she wants to ask a character called Sophie Yao out on a date.

Although Section 377A is no longer actively enforced in Singapore, the government is hesitant to repeal it even though both Britain itself has since scrapped it.

The latest social initiative against Section 377A, the Ready4Repeal campaign, gained immense traction and even drew support from establishment figures like former attorney general Walter Woon and distinguished diplomat Tommy Koh, but failed to effect change.-/TISG

https://theindependent.sg.sg/vivian-balakrishnan-denies-saying-that-section-377a-is-a-silly-law/Follow us on Social Media