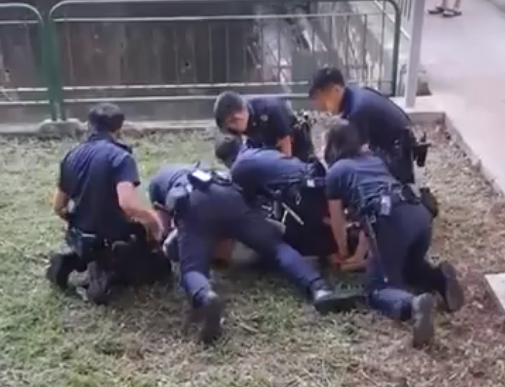 A viral video posted in the Facebook page of Singapore Ink showed 6 police officers trying to pin down an aggressive suspect before arresting him.

It is unclear what happened, but the video showed the suspect screaming aggressively as he was being pinned down and the police officers shouting at him and calling for more back-up. Some police officers looked visibly exhausted and sat on the suspect.

One Facebook user, Liza Shahrul, who claimed to be a witness to the incident said the suspect was chased by 6 police officers from a block in Henderson to Redhill Lane. She suggested that is could be a case of theft or drug abuse. She claimed that the suspect was really aggressive.

Some commenters on the video caricatured the police officers as being weak for needing 6 officers to apprehend a single suspect. Many others praised the officers for apprehending him without using lethal force and reminded those that faulted the officers that it was not easy to hold down someone who is struggling to get free.

One Facebook user though questioned if the police used the right technique in catching the suspect.

The viral video has been shared over 3,200 times and attracted over 750 comments.Follow us on Social Media