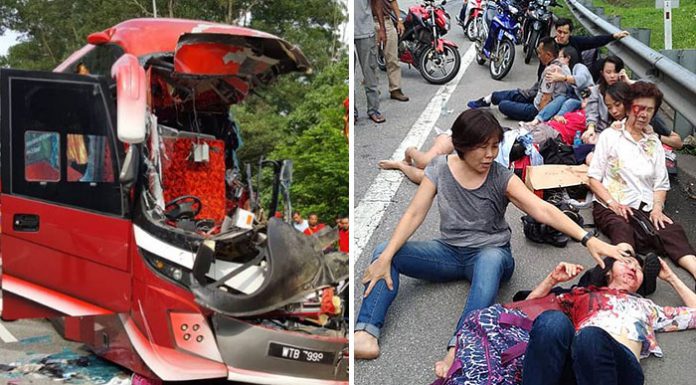 Videos showing the horrific bus crash that left 1 Malaysian dead and injured 13 passengers, including 11 Singaporeans, near Kuala Lumpur over the weekend have been circulating online. The accident occurred as the bus, which was returning to Singapore from Genting Highlands, crashed into a gravel truck along the Karak-Kuala Lumpur Expressway on Saturday afternoon.

It is believed that the bus driver had lost control of the vehicle and did not slow down as his vehicle approached a gravel truck, resulting in the collision. The bus conductor, 26-year-old Malaysian Mr Carles Lagan was trapped near the front of the bus and reportedly died on the spot.

One passenger, 19-year-old Yip Keng Yim who had been travelling with her family members, said that the accident “happened so fast”. She recounted: “After boarding the bus, I was not able to sleep because it was being driven at high speed. Suddenly, I heard a loud crash, and then everybody fell off their seats.”

A video that has been circulating on social media in the aftermath of the collision shows the moment of impact between the two vehicles. The bus can be seen travelling in the leftmost lane and crashing into the rear end of the gravel truck. The impact destroys the front of the bus and severely damages the bus’ left side:

Video footage Our Condolences. 13 injured, one Malaysian bus conductor dead as bus crashes on way from Genting. The bus, which was travelling towards Singapore, crashed into a large lorry at about 4pm. Dated: 7 April 2018, 4pm.Location: Karak Highway in Malaysia===============加叻大道長巴撞拖格 1名马国男子死亡13人傷2018年4月07日（加叻7日訊）長巴失控追尾猛撞拖格羅厘，造成13人受傷，1名马来西亚男子死亡！據了解，案發時，長巴上有3人一度受困，最后由趕抵施救的消拯員協助他們脫困，但一人已證實死亡。此案于今天下午約4時許，在加叻大道文冬往吉隆坡方向30.9公里處發生；肇禍長巴是新加坡-雲頂的長途巴士，當時正在回程中。據了解，當時長巴上共有14人，包括4名男子和10名女子；他們分別有12名是新加坡人與2名大馬人。死者遺體隨后已被送往醫院太平間，傷者則送往士拉央醫院施救，據知皆傷勢穩定。另一方面，大道管理公司在官方維持發出這消息，促請駕駛人士聽取工作人員指示，小心駕駛；另外，吉隆坡返東海岸方向第30.9公里至36公里也交通堵塞。

Two other videos show the immediate aftermath of the collision as passengers can be seen surveying the damage in the bus as they scramble to exit the vehicle:

11 Singaporeans between the ages of 19 and 81 years old were conveyed to hospitals following the crash. Six of these 11 patients have reportedly been discharged, while the remaining five are still hospitalised.Follow us on Social Media