The minute-long clip showed the woman dressed in boots, shorts, and a top with a cardigan on attempting to dance like a k-pop singer 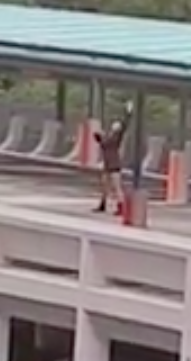 A video of a woman dancing atop the roof of a carpark went viral on social media yesterday (May 12).

The video showed a fit girl dancing at the top floor of a carpark. There was one other car on the same floor as her, but no other people were in sight.

The minute-long clip showed the woman dressed in boots, shorts, and a top with a cardigan on attempting to dance like a k-pop singer, as many netizens commented.

While it was not clear from the grainy quality of the video as to whether she was wearing a mask or not, netizens who commented on the video on Facebook said that she could be another ‘sovereign’.

Last week, a 40-year-old woman who claimed that she is a “sovereign” citizen who is above the law was charged in a district court on Tuesday (May 5) for public nuisance and breaching circuit breaker measures.

After being found refusing to wear a mask in public, Ms Paramjeet Kaur said, “The law is… you can’t tell me what to do”.

In a video circulating on social media, Ms Paramjeet said that the police had previously stopped her at the market and had let her off without a warning or a fine.

She added: “I’m a sovereign… This is something people are not going to know what it is.”

She was also not observing safe distancing when buying food at a stall and took photographs and videos of the safe-distancing ambassadors and police when told to leave.

Netizens who commented on the video of the girl dancing also suggested that she could be making a video to upload onto TikTok, a Chinese video-sharing social networking service. Others said that she could just be missing going to the club.

Read related: ‘Sovereign’ woman remanded at IMH after claiming she was “not a person”