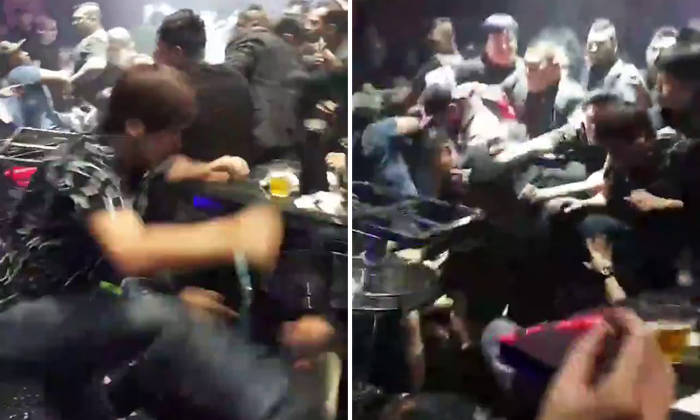 A massive brawl was caught on camera where patrons of ENVY Dance Club, located at St James Power Station, began to assault the employees of the nightclub.

A video of the brawl – which is believed to have occurred on 11 Nov – has been going viral online. While the exact cause of the brawl is unclear, it appears to have begun when a patron tossed a beer cup at a bouncer.

What started as a relatively small-scale altercation between the patron and the bouncer quickly morphed into an all-out riot as more patrons became embroiled in the fight. Chaos erupted as the majority of clubbers in the arena excitedly joined the fray.

All hell broke loose as furniture began flying and human bodies began falling over as the brawl kept growing more rowdy and a wild stampede began to take shape:

The brawlers in the video can also be heard chanting some slogans in the videos of the incident. Commenters on forums like Hardwarezone have asserted that the chants are chants of gang slogans, although the exact words of the chant are difficult to decipher.

ENVY Dance Club has since released a statement on the matter, asserting that it strictly does not condone such rowdy activity.

Revealing that police officers were also attacked and that several perpetrators have been apprehended, the club urged individuals with more information to step forward:

“Dear valued customers, with regards to the recent assault on our security officers, staff and police officers, we are conducting investigations with the help of the SPF. We ENVY Dance Club strictly do not condone such rowdy actions and will protect the public interests at all costs. We apologise for any dismays caused during the enforcement for safety and protection. Various perpetrators have already been taken down. Anyone with more information that can help do pm us. Your identity will be kept strictly confidential. Thank you for the concern.”

Dear valued customers, with regards to the recent assault on our security officers, staff and police officers, we are…