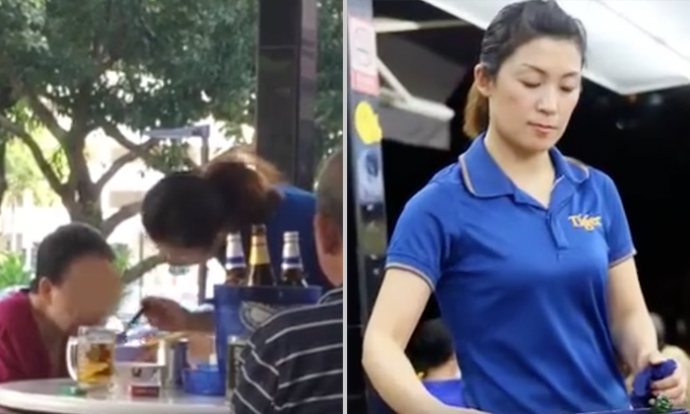 Shin Min Daily News’ video of a ‘beer lady’ feeding an old woman has tugged at the hearts of several of its readers. Another Chinese newspaper, Lianhe Zaobao, identified the ‘beer lady’ as 34-year-old Li Yan. The video showed Li besides feeding the old woman carefully, also caringly wiping her mouth with tissue between bites.

The video was taken by a man identified as Liu. The 24-year-old said that he was at the coffeeshop at Block 678 Hougang Avenue 8, when he noticed Li serving the the old woman meticulously in-between serving the other patrons.

Li told Zaobao that the old woman could neither speak nor move her limbs very well, but she will smile at Li whenever she sees her. Li said that she decided to feed the woman because she knows that everyone will grow old someday.

Li who hopes that the elderly woman will continue to keep smiling, besides feeding, also buys honey for her to help with the old woman’s digestive issues.

Facebook user Peter Kiong who responded to Shin Min’s video said: “Will definitely be there (at the Hougang coffeeshop) to support her…This is the type of FT (foreign talent) we need…(we should) do something to reward her. She had done something better than any of our MPs.”Follow us on Social Media