Victoria’s Secret Chinese model tumbles on the ramp: netizens slam her for being unprofessional 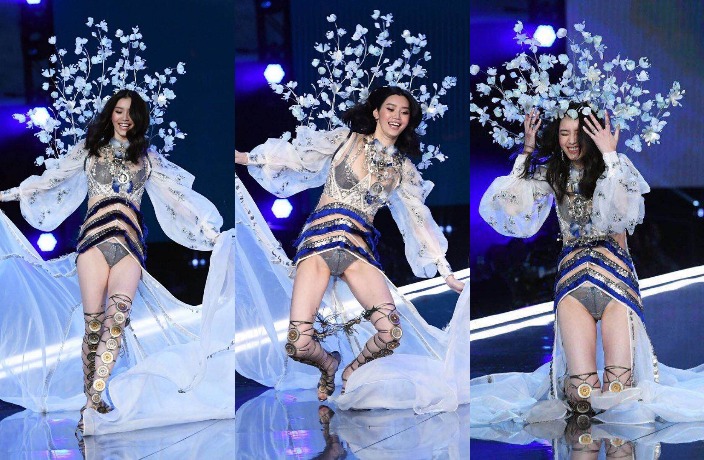 A Chinese model has apologised to her country after falling down on the runway of the Victoria’s Secret Fashion Show in Shanghai.

Ming Xi, who is known as Xi Mengyao in China, tumbled on the ramp of the iconic lingerie fashion show after accidentally tripping on the chiffon train of her ensemble on the heel of her thigh-high gladiator shoes. Laughing on her knees before trying to regain her bearings, Xi was helped up by Oliveira, another model strutting behind her.

The 28-year-old issued the apology on social media: ‘I’m sorry to let everyone down. Thanks for everyone’s concern.’

This did not spare her from netizens’ harsh criticisms, mainly coming from her motherland, despite other heartwarming messages of comfort sent to her.

In a viral story circulating on Wechat entitled “Why Xi Meng Yao doesn’t deserve a pity,” popular blogger Shiyuan from China listed the reasons why Xi should be “out of the game.” The story had been liked more than 100,000 times.

Posted by Shanghaiist on Monday, 20 November 2017

The blogger then pointed out that the model was acting like a butterfly before her fall, supposedly looking cheap, instead of paying attention to her steps.

The most awkward, and the most unacceptable offence, according to the blogger, was the model’s reaction after the stumble. Ming Xi was seen giggling, touching her hairdo, without an attempt to stand up immediately, for “a good 10 second”, she wrote.

“She had done everything a professional model not supposed to do.

“This is not your grocery wet market, but a spotlight that the whole world pays attention to… A mistake is not to be looked down, but acting dumb is a problem.”

The blogger then compared Xi with Miranda Kerr, a prominent supermodel who pretended nothing happened when one of her red heels slipped off her left foot. Unfazed, Kerr continued walking elegantly with one tip-toed bare foot.