On Sept 1, Dr Tan wrote on Facebook that he and his fellow PSP members were "very pleased" to attend WP's National Day dinner. He shared photos of himself with WP secretary-general Pritam Singh, ex-WP chief Low Thia Khiang and other WP politicians

Praise for the friendship and bond between veteran politician Dr Tan Cheng Bock and the Workers’ Party (WP) has been pouring forth, after Dr Tan was spotted at the WP’s National Day Dinner in their Hougang stronghold, on Saturday (31 Aug).

The WP is the only opposition party that currently has a presence in Parliament while Dr Tan is the very first ex-ruling party parliamentarian to start his own opposition party in Singapore’s history.

On Saturday, WP secretary-general Pritam Singh revealed that Dr Tan supported his party by buying a table at their National Day Dinner. He added that he “discussed that “September election” over a Blue Hammer cocktail” with Dr Tan.

On Sunday (1 Sept), Dr Tan wrote on Facebook and said that he and his fellow PSP members were “very pleased” to attend WP’s National Day dinner. Sharing photos of himself with Mr Pritam, ex-WP chief Low Thia Khiang and other WP politicians, Dr Tan wrote:

“We spent a good time chatting with WP members and their leaders. Pritam Singh also shared a special “Blue Hammer” cocktail drink with me. Congratulations to WP for organising such a successful event. And thank you also for the warm reception we received.”

This is not the first time WP politicians have been spotted with Dr Tan. In February, WP politicians like Mr Singh, Yee Jenn Jong and Gerald Giam were spotted at Dr Tan Cheng Bock’s residence as he hosted a Chinese New Year gathering. 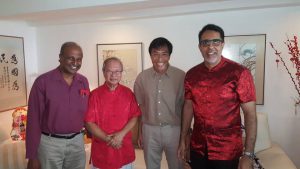 Netizens responding to the latest meeting between Dr Tan and WP leaders have praised both parties for sharing such a warm bond and asserted that the unity between the two parties will be a strength for Singapore: 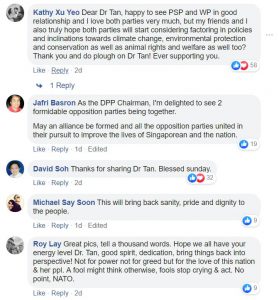 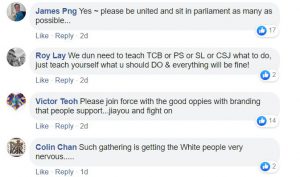