International Trump agrees to meet Rouhani with "no preconditions" barely a week after...

Trump agrees to meet Rouhani with “no preconditions” barely a week after warning Iran to “never, ever threaten the United States again!” 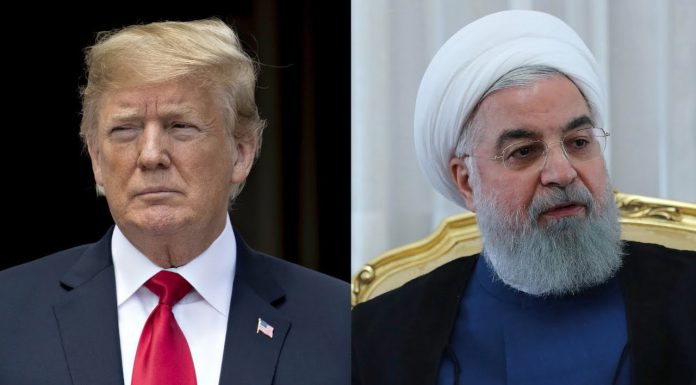 ‘I would certainly meet with Iran if they wanted to meet,’ Trump said during a joint news conference at the White House alongside Italian Prime Minister Giuseppe Conte. ‘I do believe that they will probably end up wanting to meet. I’m ready to meet whenever they want to,’ he said.

‘No preconditions,’ he added. ‘They want to meet, I’ll meet, whenever they want.’

In touting the benefits of diplomacy, Trump he would ‘meet with anybody’ and once again argued that his meeting with Russian President Vladimir Putin–which has faced heated bipartisan criticism, was a success.

‘Speaking to other people, especially when you’re talking about potentials of war and death and famine and lots of other things, you meet. There’s nothing wrong with meeting,’ Trump said.

While Trump said there would be no preconditions to meeting with Iran, he did appear to hedge the possibility of a meeting on an ability to ‘work something out that’s meaningful’ with Iran.

Iran however, ruled out talks with Washington hours before President’s Trump’s announcement.

“With current America and these policies, there will definitely not be the possibility of dialogue and engagement, and the United States has shown that it is totally unreliable,” Foreign Ministry spokesman Bahram Qasemi told a weekly news conference on Monday.

Qasemi criticized the U.S. withdrawal from the Iran nuclear deal and the economic sanctions that followed saying, “there are no conditions for such a discussion at all.”

President Trump’s more conciliatory tone towards Iran comes barely a week after he chose capital letters to convey his his fury at what Iranian President Rouhani. Trump warned Iran it risked consequences “the like of which few throughout history have suffered before” if the Islamic Republic made more threats against the United States.

Trump’s apparent U-Turn on his Administration’s policy on Iran is reminiscent of his rhetoric and actions against another regime previously flagged as ‘rogue’ by the U.S. – North Korea.

In responding to North Korea’s threat that the country was considering a strategy to strike the U.S. Pacific territory of Guam with mid-to long-range missiles in August last year, the President responded saying: “North Korea best not make any more threats to the United States. They will be met with fire and fury like the world has never seen. He has been very threatening … and as I said they will be met with fire, fury and frankly power, the likes of which this world has never seen before.”

10-months later, he met his North Korean counterpart Kim Jong Un in a Peace Summit at Singapore to sign a comprehensive document aimed at lasting peace between the two countries.

Trump withdrew the United States from the landmark 2015 international agreement in May. Iran and other signatories have been working to find a way to salvage the agreement.Follow us on Social Media