The Independent News
Home News Featured News Transgender woman feels proud to have served NS and to have saved...

Transgender woman feels proud to have served NS and to have saved lives, despite “merciless abuse” 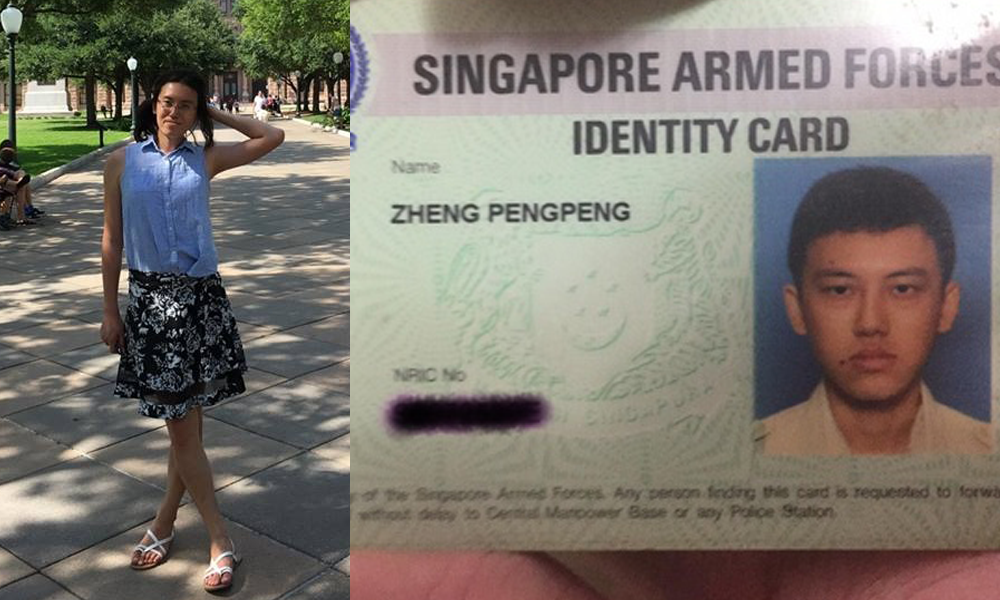 A Singaporean has reflected that she feels proud to have served National Service (NS) and to have saved lives during the course of her service, despite the “merciless abuse” she endured for being a transgender woman.

Born a male, Zheng Peng Peng recalls that she always knew she was different even though she did not know what “transgender” meant between 2009-2010 when she served NS.

Answering a question on online platform Quora on what it was like to serve mandatory conscription in Singapore as a transgender woman, Zheng – who now works as a research assistant at the University of Texas at Dallas – described her experience in NS.

Calling her NS experience “haunting yet enriching,” Zheng recalled that it did not take long for the other recruits to realise she was different and that some were even “half-tempted” to kiss her during the course of their training:

“It did not take long for everyone to realize I was ‘wife material’-knowing what everyone’s favorite food was; taking extra long to clean myself during showers; massaging everyone’s back and extremely clumsy during battle.

“One day, my superior could not stand my uselessness anymore and singled me out.

“‘You want to be stronger to protect your girlfriend! Is that clear recruit?’

“‘Understood, sergeant.’ Deep down inside I know I am the girl that you guys should be protecting.

“So, I realized my role in the Singapore Armed Forces was to be a spy. To spy on the true nature of men for my fellow girls outside Palau Tekong on the main island. Those testosterone erupting beasts locked together in temptation island, it was never pleasant living among them as a woman. As the days go by, more and more of them got dumped by girlfriends whom they have not met for way too long, and they started crying to one another their plight. Going undercover, I saw the weak side of men, how they package themselves to be strong but so easily squashed on the inside. My femininity was the closest thing to a girl they could get in camp, some of them were really half-tempted to kiss me. CREEPY!”

Zheng, who felt “loved as much as I was hated”, had the opportunity to save lives during the course of serving NS. In one instance, she helped save a fellow NSF:

“I was loved as much as I was hated. Loved for being dumb and girly, but hated for being a burden that slowed down everything. One night, another recruit developed the most unusual cough I have heard. He was however reluctant to seek treatment because men just have to package themselves on the outside, but my gut feelings told me that he did not have much time left. I carried his reluctant body to the medical center in the middle of the night. I turned out to be right-he was diagnosed with pneumonia. I saved him just half a day before it would have become incurable.

“I am unsure if it was because of this incident that my sergeants finally saw what I am useful for. I was posted to Medical Corps Training Institute upon finishing my BMTC. I was quite happy with my posting as I had more of a calling to save lives than to kill enemies. Oh! Have I forgot to mention I was often bullied? Yes. My bullying continued at the training institute. Nobody could quite explain why this meat sac behaved like a girl, but everyone was ready to abuse me instead of giving me the protection a girl needed.

“Transgender women committing suicide during service is not uncommon.”

Despite doing well in her medical training and being one of the top graduates in her batch, Zheng described that her “gender dysphoria worsened by multiples because of how I was invalidated and mercilessly abused for not conforming to expectations of a military male.”

Confusion over her loyalty between two senior officers also contributed to her feeling dispirited about NS, until she found her “calling” one night:

“I kept questioning why exactly was I here in the army when I am in fact a female. One night, my calling followed up…..

“After a long day of medical duty I decided to turn in early. One hour in, I was made awake by my ambulance driver. A private from a nearby unit decided to jump off the forth floor. The tricky part was, he landed on a grass patch that is angled 45 degrees. Which was why he was still alive. Let me tell you that we medics rarely have to deal with anything more than fractures and fevers during our two years of service. I was nerve struck, fully questioning my abilities in the minutes I had to reach the casualty.

“Having reached him, none of the protocols I learnt helped. Could not check his pulse because his hands were underneath his privates; consciousness scoring was impossible because he seemed more like asleep than unconscious; but, his backbones felt more like a piano-Every piece was clickable!

“Knowing his spine was ruined, I made a quick decision of splinting him and wrapping my arms around his neck while bearing in mind that one mistake would cost his life. I got several men to carry him into the ambulance while I gripped onto his head firmly like an octopus. It was a long trip and I made sure I held his head in the same pose throughout.

“The next day, I received a follow up from the hospital that he was in stable conditions. I SAVED HIS LIFE!!!

“I cannot guarantee whether the other medics, especially those who did not perform well back in medical school, could have done the same thing. Maybe, the reason fate had this transgender girl serve in the toughest military unit was to save this man on that night.”

Zheng concluded: “Today, I am proud to have been a medic in the Singapore Armed Forces and a woman.”