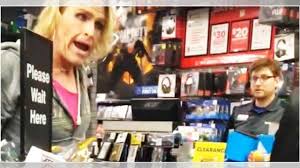 A transgender woman at a GameStop store in Albuquerque, New Mexico flew into a rage when the store clerk called her “sir” instead of “ma’am”. In an expletive-ridden tirade, the trans woman proceeds to demand her “f***ing money back” before challenging the cashier to a fight in the streets.

A video of the incident has been going viral online. In the video, the trans woman gets further enraged when another customer jumps in and tells the trans woman: “Excuse me sir, there is a young man in here you need to watch your mouth.”

The angry trans woman yelled back: “Excuse me, it is ma’am, it is ma’am. You need to settle down and mind your business, ok?”

The cashier appears apologetic for his error and tries to calm the trans woman but is repeatedly yelled at by the angry customer. The trans woman shouts: “Motherf***er, take it outside if you want to call me sir again. I will show you a f***ing sir.”

She then storms out, kicking over a pile of equipment on her way out, before returning and demanding the cashier to give her his boss’ contact information. She says: “I am going to tell them how I have been misgendered several times in this store. I’m going to ask you for the fifth time to stop calling me a man, because quite clearly I am not.”

The trans woman leaves the store shortly thereafter in a huff, claiming that she will inform the “entire LGBT community” of the disrespectful incident.