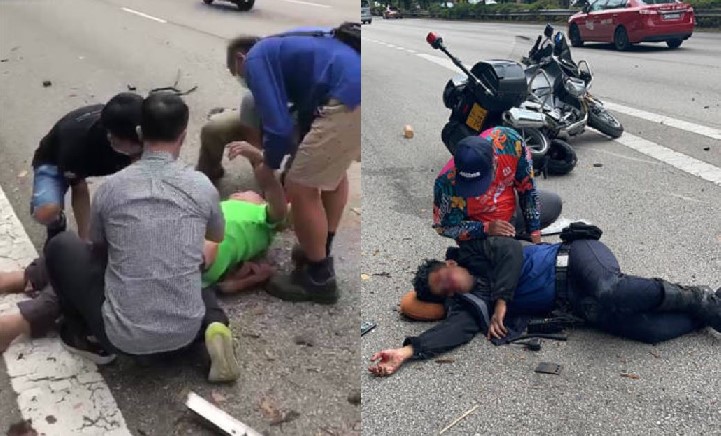 A 34-year-old Traffic police officer and a 68-year-old lorry driver were injured in an accident along a slip road from the Pan-Island Expressway (PIE) around 11.30am on Wednesday (3 Jan).

According to the police, the traffic police officer had stopped a lorry for a traffic offence when a passing lorry collided onto the rear of the first lorry, causing it to move forward and hit both of them.

Revealing that the officer was conducting checks at the chevron marking between the slip road from Bedok North Avenue 3 and the PIE towards Changi Airport, before Tampines Avenue 5 exit, a police spokesman told Stomp that the accident occurred while the officer and the lorry driver were standing in front of the stationary lorry.

The injured traffic police officer and the lorry driver, both male, were conveyed to Changi General Hospital while conscious. Meanwhile, the 30-year old driver of the passing lorry has been arrested for careless driving causing grievous hurt. Police investigations are ongoing.

Photos and videos from the incident are circulating online. The images show two men lying injured on the road while a traffic police motorcycle can be seen lying on its side on the road amid debris.Follow us on Social Media