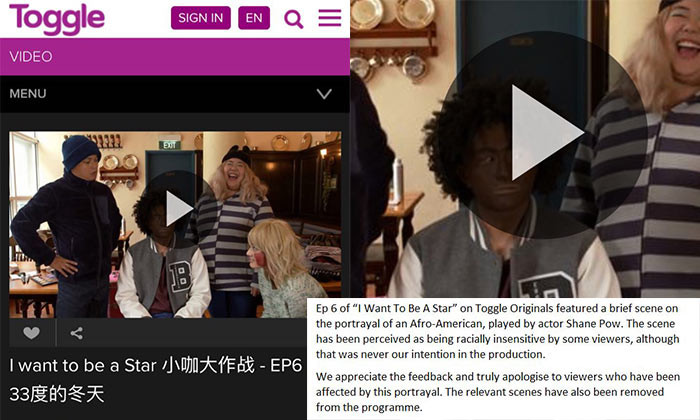 Toggle, MediaCorp’s online service, removed an episode of one of its production entirely after netizens voiced concerns that it was racially insensitive. When the casting director of ‘I Want To Be A Star’ (a comedy about calefares trying to make it big in the television industry), could not find an African-American actor for the episode, they tried to cast an Indian for that role. And when the Indian actor could not make it, they got a Chinese actor as a substitute by donning a “blackface” (in which his face was painted over), an afro wig and a sweater.

Netizens were quick off the mark to condemn the racist and insensitive content of the video. Toggle soon removed the video in response to severe criticisms and issued an apology on Twitter.

The apology read: “The scene has been perceived as being racially sensitive by some viewers, although that was never our intention in the production. We appreciate the feedback and truly apologise to viewers who have been affected by this portrayal. The relevant scenes have also been removed from the programme.”

Netizens however pointed out that the apology seemed half-hearted.

In caving in to such outrage on the internet, Toggle finally offered a proper apology.

“Our apology yesterday came out wrong. We’re sorry for the blackface portrayal and for the poor apology. We take race-related issues very seriously and that portrayal should not have happened. We’ve removed the offensive scenes from the programme and will ensure something like that doesn’t happen again.”

A Mediacorp spokesman also apologised for the racially insensitive portrayal.

“In hindsight we see it was insensitive and have removed the scene. We take race-related issues in our programming very seriously and will ensure that such depictions do not recur.”