Titus Low says he met Dee Kosh while in prison, the latter gave him advice on how to survive prison life

The most-asked question in the comments section proved to be about Titus' haircut, or why he did not have to shave his head.

Since Titus Low’s release from prison on Nov 9, he took to social media asking his followers to leave him a comment if they had any questions about his time behind bars.

The most-asked question in the comments section proved to be about Titus’ haircut, or why he did not have to shave his head. Prisoners typically must shave their heads or keep their hair “cut close” while in jail, but only prisoners whose sentence exceeds one month are required to do so.

Another hot question, which Titus made a separate video about was if he saw fellow YouTuber Dee Kosh while behind bars. Dee Kosh, 33 was handed a 32-week prison sentence after being found guilty of sexual offences involving teenage boys. The YouTuber, named Darryl Ian Koshy in court documents, solicited paid sex from a total of four teenage boys between February 2017 and August 2020.

In his video, Low said that he did meet Dee Kosh in prison.

“So we’re both like (serving a) short sentence, so it’s bound (sic) that we kinda both meet in jail”, he added.

“I mean he was nice to me, talked to me and gave me advice on how to survive prison, tell me (about his) experience here and such. So I think he’ll be like coming out next year but that’s not my story to tell”, Low said.

Responding in the comments section to a question about what happened to Dee Kosh, Low replied: “Botak”. 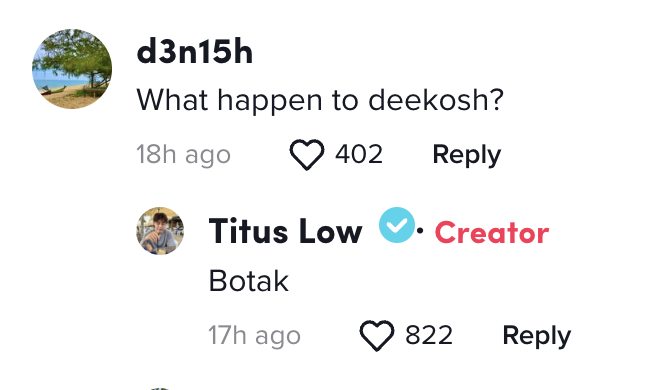 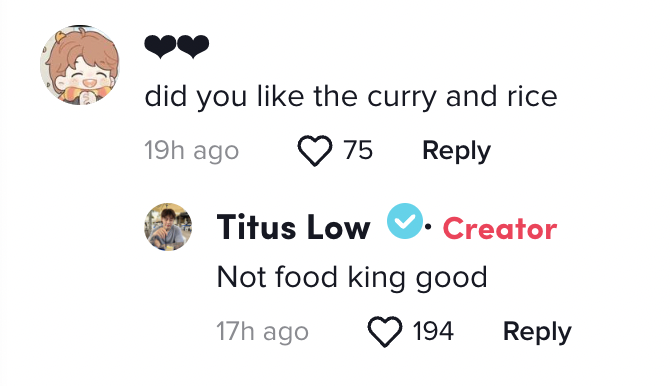 Low had been sentenced to three weeks’ jail for breaching a police order to access his OnlyFans account. He was fined another S$3,000 for transmitting obscene materials via the platform.

In his video, Low said that his stint in prison “wasn’t the best experience,” adding that he is glad for it to be over and is ready to move on from this chapter of his life. /TISG