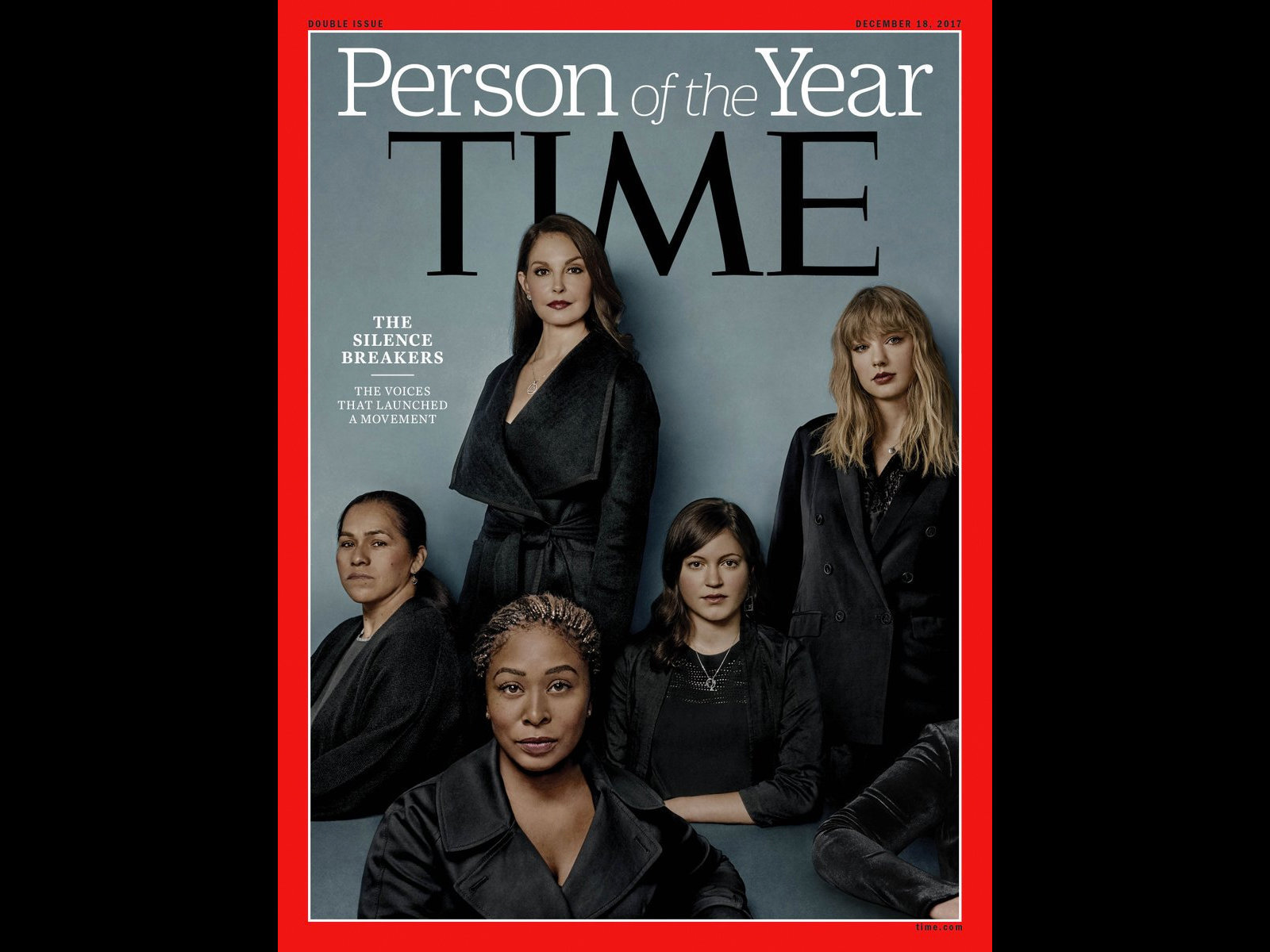 “It became a hashtag, a movement, a reckoning,” writes Edward Felsenthal, TIME’s editor-in-chief, on why “the Silent Breakers” are the Person of the Year – Ashley Judd, Susan Fowler, Adama Iwu, Taylor Swift and Isabel Pascual, who are the front-runners of the highest-velocity shifts in our culture since 1960s.

To date, the hashtag #MeToo has been used millions of tines in at least 85 countries, by victims of sexual harrassment, including many men as well.

In 1997, just before Ashley Judd’s career took off, she was invited to a meeting with Harvey Weinstein at a Beverly Hills hotel. She then described that Weinstein had attempted to force her into bed, while she managed to escape.

“I started talking about Harvey the minute that it happened,” Judd says in an interview with TIME. “Literally, I exited that hotel room at the Peninsula Hotel in 1997 and came straight downstairs to the lobby, where my dad was waiting for me, because he happened to be in Los Angeles from Kentucky, visiting me on the set. And he could tell by my face—to use his words—that something devastating had happened to me. I told him. I told everyone.”

Fowler joined Uber as a site reliability engineer (SRE) in November 2015 before calling it off  eventually.

“After the first couple of weeks of training, I chose to join the team that worked on my area of expertise, and this is where things started getting weird. On my first official day rotating on the team, my new manager sent me a string of messages over company chat. He was in an open relationship, he said, and his girlfriend was having an easy time finding new partners but he wasn’t. He was trying to stay out of trouble at work, he said, but he couldn’t help getting in trouble, because he was looking for women to have sex with. It was clear that he was trying to get me to have sex with him, and it was so clearly out of line that I immediately took screenshots of these chat messages and reported him to HR.

“I expected that I would report him to HR, they would handle the situation appropriately, and then life would go on – unfortunately, things played out quite a bit differently. When I reported the situation, I was told by both HR and upper management that even though this was clearly sexual harassment and he was propositioning me, it was this man’s first offense, and that they wouldn’t feel comfortable giving him anything other than a warning and a stern talking-to. Upper management told me that he “was a high performer” (i.e. had stellar performance reviews from his superiors) and they wouldn’t feel comfortable punishing him for what was probably just an innocent mistake on his part.

“I was then told that I had to make a choice: (i) I could either go and find another team and then never have to interact with this man again, or (ii) I could stay on the team, but I would have to understand that he would most likely give me a poor performance review when review time came around, and there was nothing they could do about that. I remarked that this didn’t seem like much of a choice, and that I wanted to stay on the team because I had significant expertise in the exact project that the team was struggling to complete (it was genuinely in the company’s best interest to have me on that team), but they told me the same thing again and again. One HR rep even explicitly told me that it wouldn’t be retaliation if I received a negative review later because I had been “given an option”. I tried to escalate the situation but got nowhere with either HR or with my own management chain (who continued to insist that they had given him a stern-talking to and didn’t want to ruin his career over his “first offense”).

“So I left that team,” Fowler said.

Adama Iwu is the head of government relations in the western states for Visa and an outspoken advocate against harassment. Earlier this year, Iwu says that an unnamed drunken man allegedly groped her at a work event. To make matters worse, surprisingly, Iwu said no one in the room admonished his behaviour or cared. Like most sexual harassment cases, especially the ones that go unreported, this moment went mute in the room. Her male colleagues downplayed the incident because according to Iwu, they figured she knew the guy.

“It enraged me that it happened in front of other male colleagues,” Iwu told The Sacramento Bee in October. “They said ‘Oh, you hugged him, we thought you knew him.’ That doesn’t mean when I spent the other three minutes pushing him off me that I didn’t want someone to step in and say ‘She said “no,” stop.’”

Just moments before the man violated her, Iwu told CNN that she and other colleagues had wrapped up a conversation about Harvey Weinstein and how men have the power to become allies for women subjected to sexual harassment. In this moment, ironically, no one stepped in to become her ally when the man groped her. But Iwu refused to be silenced.

“Why didn’t we speak up? Sometimes out of fear. Sometimes out of shame. Often these men hold our professional fates in their hands. They are bosses, gatekeepers, and contacts. Our relationships with them are crucial to our personal success.”
Taylor Swift

In 2013, the singer-songwriter took a photo with a Colorado radio DJ after an interview. During the photo-taking, Swift says, DJ David Mueller reached under her skirt and grabbed her rear end. Swift privately reported the incident to the station at which Mueller worked, and he was fired. Mueller then sued Swift for defamation; she countersued for a symbolic $1—and won.
When asked why the pictures taken during the assault didn’t show the front of her skirt wrinkled as evidence of any wrongdoing, she said simply, “Because my ass is located at the back of my body.”
When asked if she felt guilty about Mueller losing his job, she said, “I’m not going to let you or your client make me feel in any way that this is my fault. Here we are years later, and I’m being blamed for the unfortunate events of his life that are the product of his decisions—not mine.”

Mexican agricultural worker Isabel Pascual is a pseudonym for a woman from Mexico who works picking strawberries and was harassed, and was one of the 700,000 female farm workers who marched in solidarity with Hollywood actors against sexual assault in November.

“Approximately 700,000 women who work in the agricultural fields and packing sheds across the United States. For the past several weeks we have watched and listened with sadness as we have learned of the actors, models and other individuals who have come forward to speak out about the gender based violence they’ve experienced at the hands of bosses, coworkers and other powerful people in the entertainment industry. We wish that we could say we’re shocked to learn that this is such a pervasive problem in your industry. Sadly, we’re not surprised because it’s a reality we know far too well. Countless farmworker women across our country suffer in silence because of the widespread sexual harassment and assault that they face at work.

“Even though we work in very different environments, we share a common experience of being preyed upon by individuals who have the power to hire, fire, blacklist and otherwise threaten our economic, physical and emotional security. Like you, there are few positions available to us and reporting any kind of harm or injustice committed against us doesn’t seem like a viable option. Complaining about anything — even sexual harassment — seems unthinkable because too much is at risk, including the ability to feed our families and preserve our reputations.”