The silly Mourinho-Pogba row that may further sink Manchester United 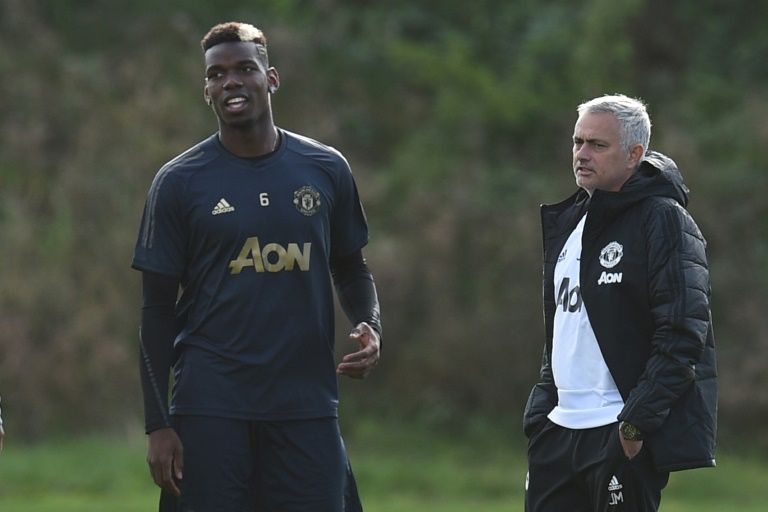 JOSE Mourinho (right) and Paul Pogba were once touted as the best manager-midfielder pair at Manchester United. But in recent weeks, they went for each other’s throats, worse than cats and dogs, in one of the most disgraceful running battles in the English Premiership.

Pogba joined United for a club record £89 million ($112 million) just weeks after Mourinho was hired in 2016. But the former Juventus player was repeatedly criticised by Mourinho during his two-and-a-half year reign.

And when Mourinho was sacked earlier this week, Pogba added salt to injury Pogba when he took to Instagram just moments after news of Mourinho’s departure broke, posting a picture of himself smiling and writing “caption this” next to it.

The 25-year-old’s post was widely interpreted as celebrating Mourinho’s departure and he was criticised by former United defender Gary Neville, who responded on Twitter by writing: “You do one as well!”, suggesting he should leave the club as well.

Over 64,000 people had ‘liked’ Pogba’s cheeky message, but he deleted the post 10 minutes later amid claims it was actually part of a marketing campaign for Adidas.

Now United plan to significantly fine Pogba for his “unprofessional conduct” although he quickly deleted a controversial social media post of him smiling after manager Jose Mourinho was sacked by the club.

The volatile Mourinho’s exit was in part triggered by the breakdown of his relationship with France midfielder Pogba, who did not even make an appearance as a substitute for Sunday’s dismal 3-1 defeat at Liverpool.

The Mourinho-Pogba spat was further strained after his inspired performances helped France win the World Cup in Russia in July. Mourinho opted not to praise Pogba, instead infuriating the star by publicly asking why he did not try as hard for United.

Pogba was subsequently stripped of the United vice-captaincy earlier this season.

Jita, who won the SNOC ‘Coach of the Year 1980’, says any in-club clash between the coach and top player is an “instant recipe for downfall, for one or the other or both”. He adds: “Mourinho doesn’t think Paul Pogba is as good a player as he thinks he is. Likewise Pogba doesn’t fancy Mourinho’s coaching tactics. There’s been a complete breakdown in the last six months between the pair of them, probably [over the last] year.

‘DANCING ON GRAVE OF MANAGER’

“But Pogba has completely gone overboard this time around. I believe that dancing on the grave of the manager who has just been sacked is surely out of order.”

Several times, the major British newspapers captured the pair having a frosty exchange on the training ground as Mourinho grew angry with his key midfielder’s lethargic performances, dropping him on several occasions to spark talk he would be sold by the end of the season.

Former United midfielder Darren Fletcher knew Pogba during the Frenchman’s first spell with the club as a youngster and he rightly says his old team-mate “needs a kick up the backside”.

Fletcher fears Mourinho’s sacking could convince the flamboyant Pogba that he can now get away with whatever behaviour he feels like, unless the new manager clamps down quickly.

“I don’t think he’s conducted himself well recently and I think he needs a kick up the backside,” Fletcher told the BBC. “I think his post today, whether it was his team or whatever, it was totally out of order. That’s a big concern for me.

“Everybody talked about, ‘Who’s going to go, is it going to be Pogba or Mourinho’. Now, if Pogba starts thinking that he’s bigger than Mourinho, there’s your next problem.

“Somebody needs to get control of Paul and say, ‘Listen, this hasn’t been a battle between Mourinho and Pogba and you’ve won, you’ve got to go and prove yourself now.'”

In my opinion, after having covered the English Premiership for over three decades, it saddens me immensely that Manchester United is in this acrimonious, if not devilish, position with mismanagement at the highest level.

Millions of United fans will definitely be pulling their hairs at this very sorry state of affairs at the ‘Theatre of Dreams’ at Old Trafford, wherein in terms of team performance and global image, the Red Devils (United’s nickname) have been the laughing stock in recent months.

Pogba, in my view, has been an outright disgrace and utterly unprofessional in challenging the manager and his gung-ho stance probably played a major role in the total disharmony in the United dressing-room.

Mourinho has now left with a rather outrageous £22.5 million pay-off. I believe Pogba has to be shown the door, too, for his pathetic behaviour as a multi-millionaire footballer, who thinks he’s above the football-law in taking unwarranted pot-shots at his manager.

With this Mourinho-Pogba war during the merry year-end holiday season, it’s an absolute no-win situation at one of the world’s most iconic and best-supported clubs.

In two words, I will sum it up: Manchester Dis-United!

https://theindependent.sg.sg/manchester-united-star-pogba-introduced-to-islam-by-his-mother/Follow us on Social Media