The rail corridor at the halt at Tanglin 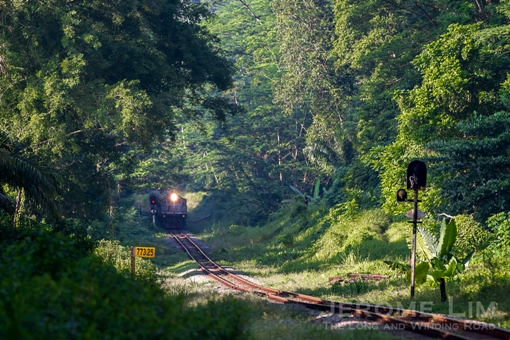 Change is about to come to the Rail Corridor. Its southern half will be closed from the second quarter of 2016 to allow a water pipe to be laid under it, and I suppose that before it can recover from this intervention, we could see work being started on transforming parts of the corridor into a space that will have an appeal to the wider community.

The stretch of the corridor in the days of the railway (c. 2010) at the former Tanglin Halt – a place that could transport you far from the madness that is Singapore.

I wish to remember the corridor as it was in days when it attracted little interest. Ignored and left to the railway, the space grew into one that had a magical feel to it, a space one could quite easily lose oneself in. While the space still serves as an escape some four and a half years after the railway ceased operating through it, its magic has diminished. Stripped of most of its railway paraphernalia, turfed over, trampled on and worked on, there is now quite a different feel to the corridor.

The Rail Corridor, near the Clementi woodland, in greener days.

One stretch of the railway I would like to remember as it was is what, if the planners have their way, will become a “Cultural Valley”, “a vibrant activity space where workers and nearby residents can enjoy activities such as outdoor film screenings”. It is what I hope will not be, a transformation that threatens to have us forget the joy the space would once have given us.

Already in a state of flux – parts of the same stretch near the Clementi woodland have temporarily taken on the appearance of the concretised world that the railway has long kept away.

Already, we have all but forgotten it as a train stop, Tanglin Halt; even if this is remembered in the name of the adjacent public housing neighbourhood. Lines also branched off in the area, serving the British military at Wessex Estate and at Ayer Rajah. The stop, the branch lines, and its platform, had disappeared by the time I first set eye on the stretch. All that was left of the halt was a rather worn looking building, decorated as all abandoned buildings outside of Singapore might be (technically it stood on a piece of Malaysia). That vanished from sight almost immediately after the land was handed back; an aberration perhaps in the landscape that needed to be removed once it had become incorporated into the overly manicured Singaporean landscape.

The Cultural Valley being proposed at Buona Vista.

It is strange that similar renderings found on the missing structure, have, with official sanction, decorate the structures under a road bridge just a stone’s throw away. The Rail Corridor Art Space, thought up by the Urban Redevelopment Authority (URA), the Singapore Land Authority (SLA) and the National Arts Council (NAC), which was launched in December 2013, provided would be graffiti artists with an outlet to add colour to what would otherwise have been the grey of dull concrete.

And a northward view.

Like the corridor, the space will soon lose its colour. Work to lay the pipe will require the corridor south of Holland Road, including this Buona Vista stretch, to be closed. While we can look forward to sections of it progressively reopened from the fourth quarter of 2017, this stretch of the corridor would probably bear no resemblance at all to the magical world I might once have found an escape in.

Coloured concrete under the Commonwealth Avenue viaduct.
—
republished with permission from ‘The Long and Winding Road‘.