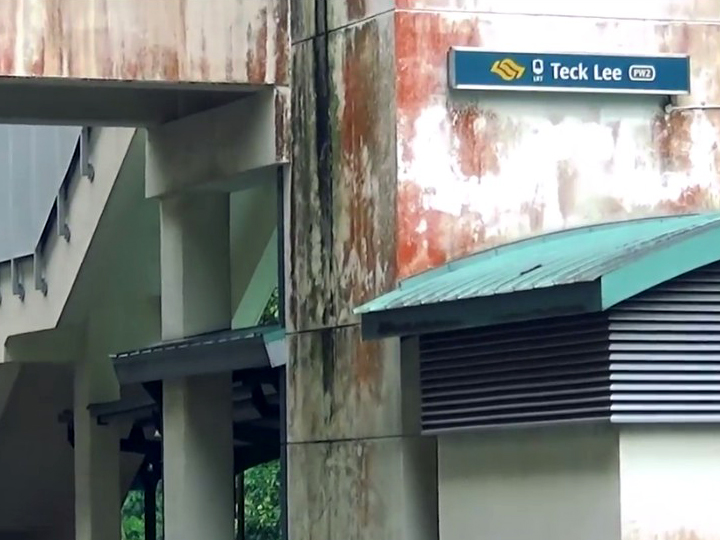 Teck Lee LRT station – a station on the Punggol LRT Line – remains shut over a decade after it was built despite repeated assurances by the authorities. It is the only LRT on the Punggol network that remains closed to date:

The Punggol LRT line officially opened on 29 January 2005. Planning for the line had been in the works since 1999 and construction was completed in 2004.

The area surrounding Teck Lee station, named after a prominent businessman Lim Teck Lee, was slated for residential development back then but such plans never materialised.

Today, the dilapidated station is shrouded by forests, as can be seen in this video of the area by filmmaker Maxson Goh, published in October this year.

The authorities have repeatedly announced that Teck Lee station will be opened shortly but such plans have not come to fruition so far.

On 29 Dec 2016, SBS Transit announced that the station will open in tandem with developments in the region surrounding the station. Such plans did not materialise.

Earlier this year, The Straits Times announced that the station will be opened on 31 March 2017:

“Residents in Punggol will find it much easier to get to the Marina Country Club, near Punggol Way, when another station on the Punggol light rail transit (LRT) system opens for service next Friday.

“Teck Lee station (PW2) is set to open when its surrounding area is developed. The loop service ends at Punggol Town Centre station – which is connected to the Punggol MRT station.”

These latest plans also did not come to pass.

Interestingly, trains passing through the Punggol LRT network always stop at the empty station but the doors never open. This, coupled with the decrepit appearance of the station, has prompted urban legends and ghost stories about the station and the cause of its closure to abound.

For now, it remains unclear whether Teck Lee is another victim of poor government planning.

https://theindependent.sg.sg/transport-ministers-reveal-problematic-bplrt-was-really-an-afterthought-constructed-due-to-political-pressure/Follow us on Social Media