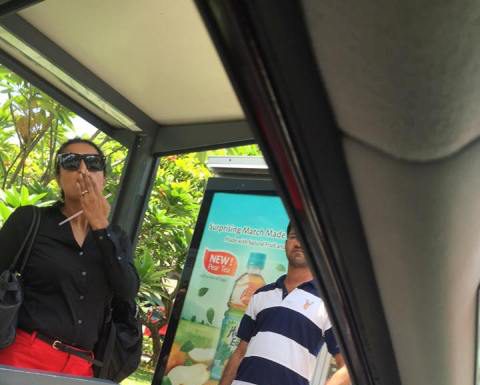 A taxi driver claimed that a couple waiting at a taxi-stand in Waterloo Street insulted him, just because he would not drive a few minutes forward for them to board his cab. The driver, Patrick Tan writing in his Facebook, claimed that there was another taxi in front of him (he had stopped because the traffic light was not in his favour), and that was the reason why he could not inch forward any further. The taxi driver claimed the couple were foreigners.

He said that the couple besides vulgarly scolding him, also prevented other passengers from boarding his taxi. They said to the others that they should not board because they wanted to take the taxi. After how they treated them, the cabbie said that he did not want their business. This was when the couple accused the cabbie of being a racist.

He said that eventually an Indonesian Chinese couple walked from the back of the queue to board his taxi. And when he moved off, he saw the couple walking further than where he was to board another taxi.

—
MoXXXfXXXers couple foreign talents. Later will upload the memory card from my car cam.
Scenario at Waterloo street taxi stand. Every one who been there know it’s near the traffic light junction. This couple came from the front and go to the taxi stand. Behind me the direction there’s a lady also walking towards the taxi stand but since this Two idiots reached first so she let them take my taxi.

In front of me the taxi took another Pax and met with red light. I’m waiting for this Two idiots to walk towards my taxi but they stand like statue there so I advance a bit forward to them but it’s still red light. See how close my taxi to them already.When closer to them they still don’t wanna come over. So I unwind my window down and this bXXX ask sarcastically whether am I for hire or waiting for someone.

I replied back this is a taxi stand and my roof is in green of cos I’m for hire. She scolded me “fuck u” and demanded me to move my taxi so that the she don’t have to walk. If that’s the case I will be very close to the taxi in front which is still at red light. Maybe both of them are disabled that even a few steps they can’t walk. After she scolded me “fuck u” I told them I won’t be fetching them and request them to take the taxi behind me. (by this time another few ppl taking cabs in the queue).

I asked those few behind who want to take my taxi and she tried to stop them and insisted she want to take mine. Since we had arguement I definitely won’t be taking them in case something happen on the way to their destination. Of cos I need to protect myself. She started to malign me that I’m racist because I don’t wanna fetch them. 1 Indonesian Chinese couple can’t take it and walk to my taxi and said they will take mine.

After they boarded and my taxi move forward cos its red light again. Guess what this pair of idiots did when I look into my rear mirror? They LPPL had to walk a longer distance to the taxi behind me compare to where I am. LOL!! So Long never so pissed off by these idiots foreigners. Now I know why some taxi uncles told me they rather don’t earn den fetch them esp NRIs because they always give troubles.