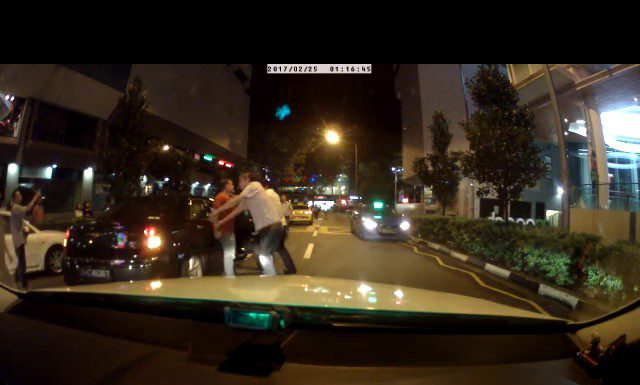 A reader sent us a video of a man being assaulted by a Caucasian man in what appears to be a road dispute. It is unclear what the dispute is about but according to the time stamp in the video the incident happened on 25 April at about 1.16am. The person recording the video clip can be heard saying that the fracas happened at Orchard Towers.

The video showed the Caucasian man coming from nowhere swinging at the local man and trying to drive the car away. When the man tried to stop him from doing so, another comes from behind and collars him hardly.

The man collaring him walked away when a Comfort taxi driver coming from the opposite direction stopped his vehicle and walked towards the man being assaulted to assist him.

The other Caucasian man however continued raining punches and kicks on the man in the white shirt.