The Independent Singapore News
Home News Tan Kin Lian’s followers suggest he use a photo of his dog... 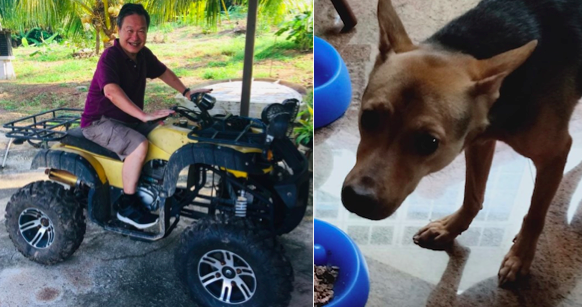 Former NTUC Income chief executive officer Tan Kin Lian left a rather crucial decision in the hands of the Internet – the choice of image for election campaign posters.

Earlier today (July 8), he polled his followers on social media and asked them if he should use the photo of him riding an All-terrain vehicle (ATV), or what he titled ‘Useless dog message’.

The latter is an image of his dog, with the following caption, “OK, I am a useless dog, but I have a good life. TKL family takes good care of me. Why you people vote PAP and suffer? Stupid, right?”

Unsurprisingly, 60 per cent of the 65 people who voted chose that he use the following image:

However, despite poll results, Mr Tan announced later in the day that the image of him riding an ATV reached 53,000 people.

In a separate post, he added that the image of his dog only reached 21,000 people.

Previously, Mr Tan offered to be Singapore’s next President and only demand a salary of $1, but with rather specific condition that he wanted imposed. He wanted the front seat in the upper deck of double-decker buses to be reserved for him.

71-year-old Mr Tan is a businessman, social activist, and a former presidential candidate who ran in the 2011 Presidential Election. As a former member of the People’s Action Party (PAP) for 30 years, Mr Tan left in 2008 because of inactivity and disagreement with the party’s value system. He was previously the party’s branch secretary at Marine Parade for three years and was chosen in 1977 by Emeritus Senior Minister Goh Chok Tong.

Earlier this year, Mr Tan announced his intention to contest in the next General Election (GE). He also added that he will only be contesting the GE if other like-minded people join him to achieve a change in government. /TISGFollow us on Social Media