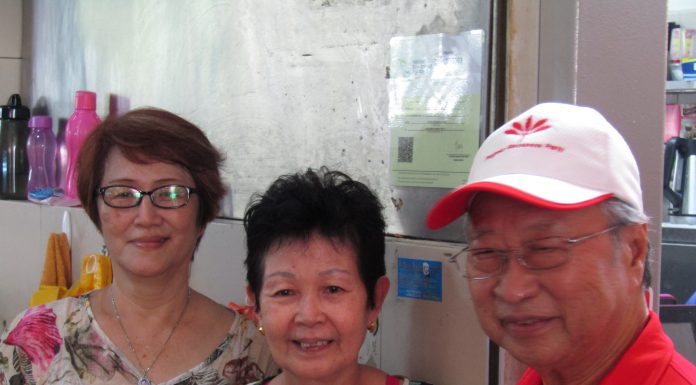 The walkabout covering 29 Constituencies covered all four corners of Singapore. Dr Tan was spotted at two locations at Ghim Moh and Tiong Bahru. Party assistant Secretary-General Anthony Lee accompanied him at both locations.

At Tiong Baruh Market, People’s Action Party (PAP) Member of Parliament (MP) minister Indranee Rajah ran into Dr Tan while she was on her own walkabout canvassing for votes for the Tanjong Bahru GRC.

The hawkers and patrons at Tiong Bahru market gave a warm reception to Dr Tan, wishing him success and took selfies with him.

At about 11 am the various teams finished their walkabout at an open field along Old Holland Road for a final debrief and a photoshoot.

During the walkabout, the teams heard the main concerns of the voters, like escalating cost of living and the poor state of the economy. He said the walkabout was to present the PSP team to the public and that the party is more than myself.

“We are introducing the younger members to the public and I am happy that the day has arrived,” he said, adding that, “Change is needed.”

He also said there was a good response on the ground and the numbers (in membership) are growing for the party.

“There were 300 members who walked the ground. The target is to reach more than 1000 members,” he said.

He told the media representatives the youngest member of the PSP is a 17-year-old.

Dr Tan said the young members of the party makes the ‘Merdeka’ generation guilty for not speaking up when they had the chance.

When posed with the question about what message they were sending PAP by targeting all 29 contituencies, Dr Tan said, “We are a friendly opposition party,”

Nevertheless, the PSP said coalition-building is a work in progress and it takes time to build. “We need to have more lunches and breakfast with them,” Dr Tan said.

“We have people from all walks of life.”

He also added the party will keep to the fundamentals of transparency, independence and accountability.Follow us on Social Media

Singapore— For a whole week, Madam Tan Poh Choo, 70, lived in fear,  believing she had Covid-19 and would have to be separated from her family. She had gone to My Family Clinic in St George's Road in June and...
Read more

NOC saga: ‘This is not humane, it’s sickening & disgusting how much you disrespect our concerns’ ― co-founder Ryan Tan speaks up against Sylvia...

NEA: Over 800 partially vaccinated diners found at hawker centres in a week

Singapore ― The National Environment Agency (NEA) said on Tuesday (Oct 19) that more than 800 people not fully vaccinated against Covid-19 were found...
Read more