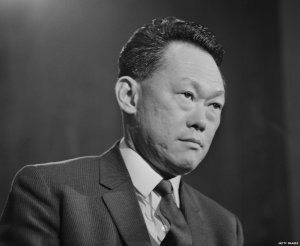 The founding Prime Minister of Singapore’s daughter, Ms Lee Wei Ling, published a viral Facebook note which has now been shared more than 6500 times. In her note she cringed at the hero-worship of her father and said that her father would have disapproved of it if he was alive.
Ms Lee particularly called out The Straits Times for leading the hero-worship. She said, “What made me write this article was a front page report in The Straits Times (Mar 21). It carried a photo of an outline of Papa’s face made with 4,877 erasers that form an installation which is 2.3 m wide and 3.1 m tall, titled Our Father, Our Country, Our Flag.”
An assistant editor of The Straits Times yesterday took offence at Ms Lee’s note and criticised Ms Lee for being a “sourpuss” and said that “if we hadn’t done this barrage of tributes, some political enemies might write bad things about us”. He asked Ms Lee to be glad that “we don’t spit on your dad’s grave.”
The editor later took down the post because he felt that it was too strongly worded. No apologies were offered.
If some Singaporeans had expected The Straits’ Times to report on Ms Lee Wei Ling’s Facebook note, they were surprised that the newspaper did not. Some netizens felt that the broadsheet should have published Ms lee’s note not only because she was the late ex-Prime Minister’s daughter, but also because it was a viral post which merits reporting.
Ms Lee is also a regular columnist for The Straits Times, but she declined to provide comments for publications marking the first anniversary of her father’s death.

The month-long hero worship of Lee Kuan Yew, an event overseen by his son's government, is criticised by his daughter….

No reason for Sunday Times not to run Lee Wei Ling's views on LKY's death anniversary. After all, they pick up from…

Many students and parents faced tremendous pressure yesterday as Primary 6 students collected their Primary School Leaving Examination (PSLE) results. Amid the tension, one father's social media post won the hearts of hundreds online as he celebrated his son regardless of...
View Post
Featured News

Sengkang GRC MP Louis Chua Kheng Wee revealed last week that some of his residents were unhappy with the red colour scheme that was selected for HDB façade repainting works, even though the colour scheme was chosen by popular vote. Mr Chua,...
View Post
Featured News

Education Minister Lawrence Wong reminded 12-year-olds across the nation that they are not defined by their examination scores, as the students collected their Primary School Leaving Examination (PSLE) results yesterday (25 Nov). The PSLE is a national examination in Singapore taken by...
View Post
Please follow and like us: