The Straits Times today took out an advertisement in its own newspaper for a workshop for Forum Letter writers. The workshop promises to teach participants ‘how to write forum letters that can become the talk of the town.”

The advertisement which pitched its workshop to ‘students in secondary schools and tertiary institutions’, as well as to ‘adults who want to write good forum letters and good social commentaries’, is being ridiculed by several netizens: 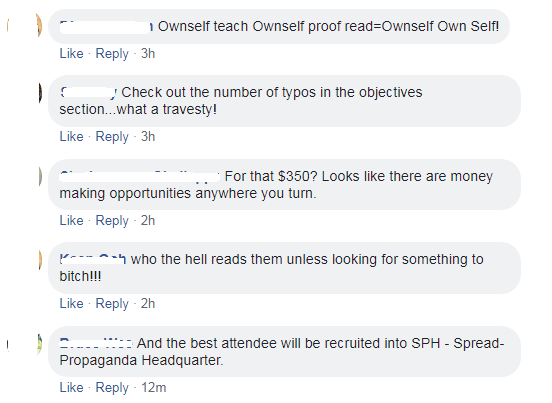 Participants would have to pay $350 to attend the workshop. Besides promising the participants a special dialogue with the Straits Times Forum Editor, the advertisement also promised participants that at the end of the training, they would be able to:

Some have criticised the Straits Times Forum page for publishing letters which are frivolous. Rice Media for example, said that it sent 14 letters to the ST Forum page. Of the 14 letters which were sent, only 3 were published. The 3 published letters dealt with the following topics:

Some of the letters which went unpublished dealt with heavier subjects such as:

There is even a Reddit thread which discusses the topic of, ‘Here’s How We Got the Straits Times Forum to Publish Our Nonsense Letters’.

Another upvoted Reddit user said: “It’s a dying medium that fewer and fewer people care about. So why should ST be so strict about forum letters? Their paramount objective, after all, is to make money. They want something that’s interesting to read. Besides, it’s really hard to ascertain the veracity of the published letters. As long as they sound interesting, believable (even if they are borderline absurd) and may spark discussions, it’s good enough for ST.”

Yet another said: “I got published a few times under pseudonyms, but once I wrote a letter criticizing the government’s top down push for cashless, which wasn’t published. Granted, small sample size, but coincidence?”Follow us on Social Media