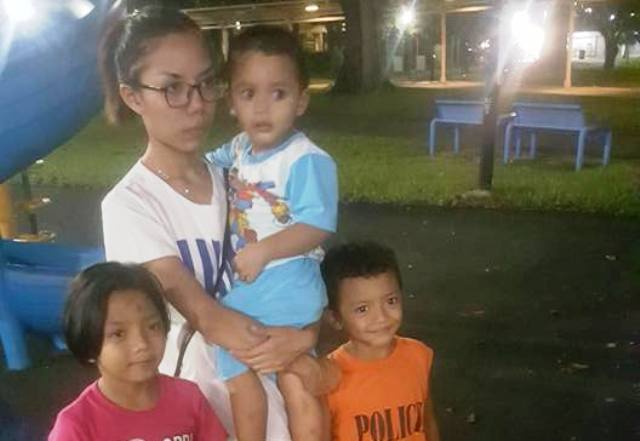 The story of a 27-year-old woman who has been living in a park in Toa Payoh with her 3 young children for over 6 months has gone viral. Facebook user Eagle Kumar who shared the plight of the family said that the children were of the ages 7, 6 and 3. The family has since found temporary accommodation in a friend’s home in Toa Payoh.

The woman speaking to a Chinese daily Zaobao said that she got married at the age of 19 and that she separated from her husband early last year when she found out that he was having an affair with another woman.

The woman who is working as a receptionist said that she moved back to her maternal family after the separation, and got to know another man at this time. The woman’s family could not accept this man and so she moved into this man’s house. The man however got into trouble and lost his house, ending up homeless.

The woman said that she will sometimes sleep in her friends and relatives houses in the area, but if there was no space in their houses she would stay in the nearby park. If they had enough money, they would stay at a hotel.

She tried to apply for a rental flat last month, but as both her’s and her boyfriend’s divorce procedures are not completed, so did not meet the eligibility criteria. They have to wait until June to apply to re-apply.

“Every night, my boyfriend will not sleep well, because he keeps watch over the children. But we have been accustomed to this way of life,” the woman said.

The mother’s nomadic lifestyle however has not disrupted the children’s schooling. Her eldest daughter started primary 1 this year. Her two other children are in the nursery.

The two younger children have their bath in the nursery. The homeless woman and her daughter bath at her friends’ homes or at public toilets.

The good samaritans who are helping the woman have referred her to the area’s MP. They are also appealing to members of the public for groceries for the family.