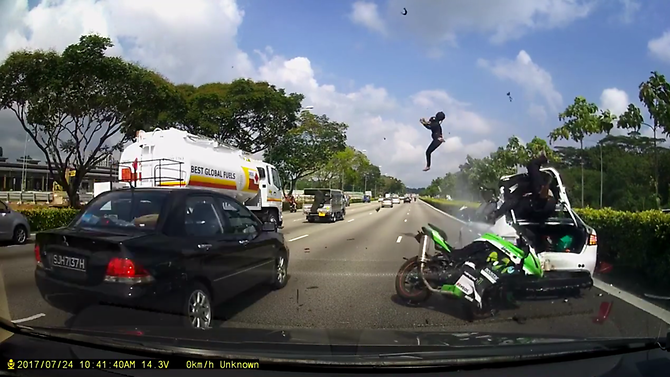 More details have emerged about the motorcyclist and pillion rider who were admitted to Khoo Teck Puat Hospital’s intensive care unit with multiple fractures after they crashed into a stationary car on Seletar Expressway (SLE).

The accident occurred on 24 July around 10.40am, before the Lentor exit. A car had stalled at the right-most lane of the highway when the motorcycle crashed into it. The two men were violently flung off the motorcycle upon impact

It has since been revealed that the accident victims are motorcyclist, 24-year-old Danny Raj Muniappan and pillion rider, 21-year-old Trivikram R L. Both men are Malaysian citizens employed by Certis Cisco.

It has been reported that the accident occurred as the two good friends were returning to their rental home in Johor Bahru, following the end of their shift at Changi Airport.

Danny continues to be unconscious since the accident and has suffered a ruptured bladder, fractured pelvic bone, a broken left arm and left leg, besides having lost a lot of blood.

Danny’s father has reportedly stated that doctors are waiting to operate on his son next week since he has “some swelling and blood clots in his brain.”

Trivikram has been drifting in and out of consciousness and has not been able to speak since the accident. He too suffered a fractured pelvic bone and a broken leg.

Certis Cisco has stated that it will extend assistance to both the victims and their families.Follow us on Social Media