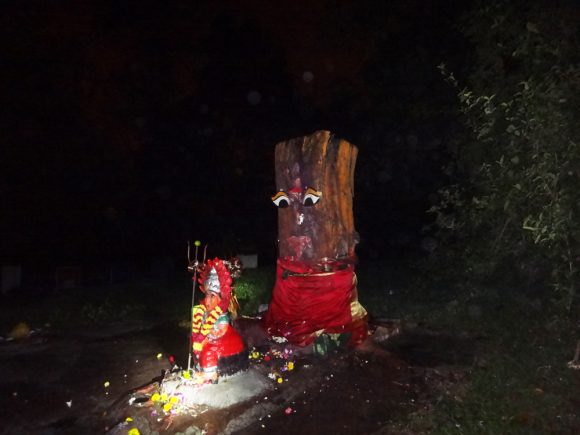 Singapore’s very own paranormal investigators, Ghost Files Singapore, searching for supernatural phenomenon at a Kali shrine in the Choa Chu Kang Hindu cemetery, claim in their latest video that they made contact with the other side.
The investigators used white noise for their paranormal communications and kept asking the spirits if they should leave, when they were startled by what they thought was the grunt of a wild boar. But there were no wild animal that could be sighted. When they continued asking in Tamil if they should go or stay, there was a clear Electronic Voice Phenomenon (EVP). The EVP saying ‘Po!’ (‘Go’ in Tamil) could be heard clearly in their video.
The investigators claimed that it soon started to rain which meant that they had to leave with their paranormal investigative equipment, but when they got to the Muslim cemetery nearby, it was not pouring there.
[fvplayer src=”http://youtube.com/watch?v=hW9-KLN-fg8″]
White noise is a type of noise that is produced by combining sounds of all different frequencies together. White noise is a combination of all of the different frequencies of sound, and has been described as 20,000 tones all playing at the same time. White noise is often used to record EVP.
Paranormal investigators consider EVP to be a form of supernatural phenomena but, psychologists regard EVP as a form of auditory pareidolia (interpreting random sounds as voices in one’s own language) and a pseudoscience promulgated by popular culture.Follow us on Social Media