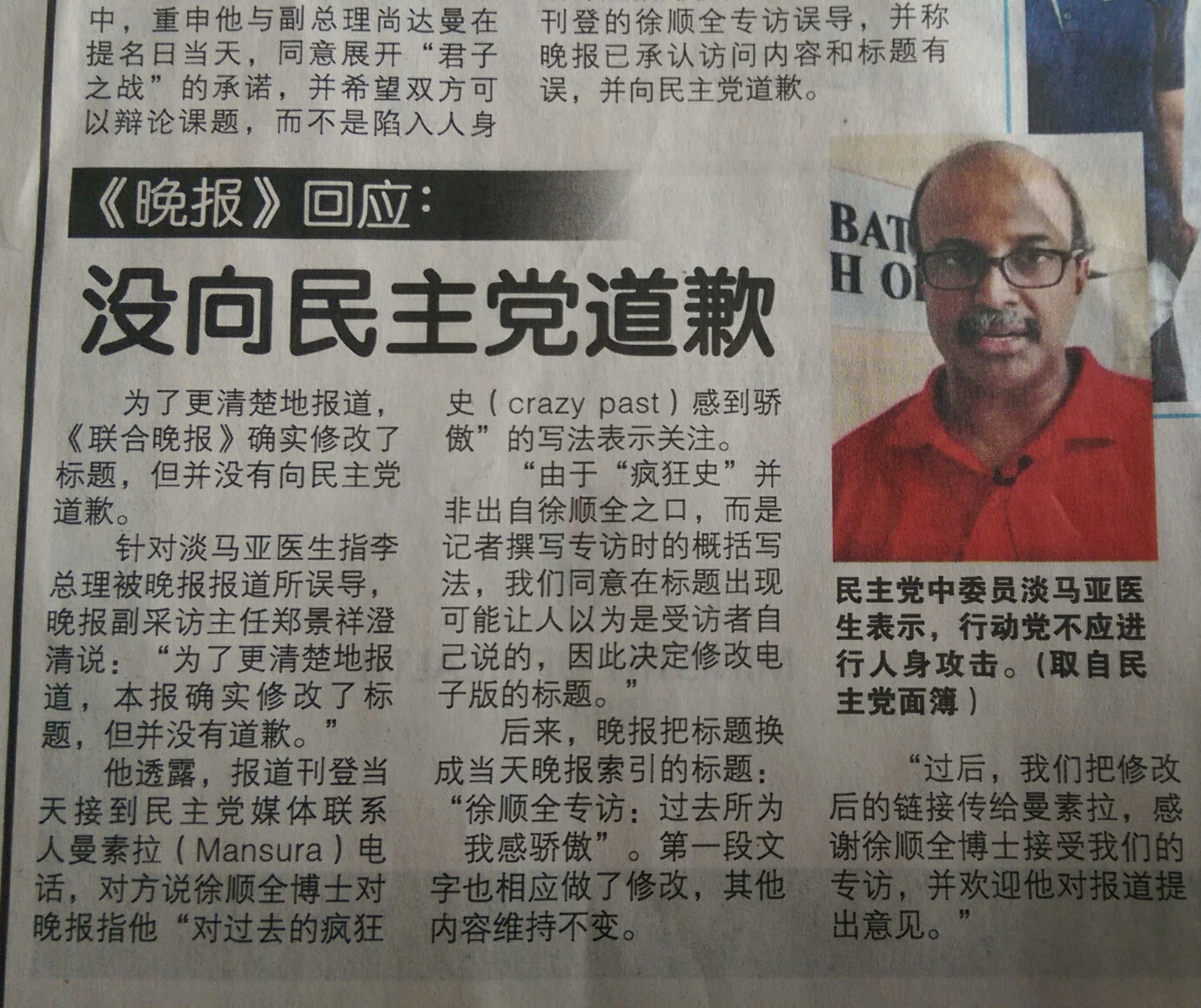 By: 永久浪客/Forever Vagabond
In response to Dr Paul Thambiah’s comment that PM Lee may have been misled by Wanbao’s article published on 28 April in its interview with Dr Chee, the paper clarifies its stance on page 4 at the left bottom corner yesterday (1 May).
Wanbao admitted that it has changed the title of the article to “present a more accurate report”. However, it refuses to apologize to Dr Chee.
Wanbao’s Associate News Editor Ting Kheng Siong said, “To present a more accurate report, Wanbao did amend the title, but it did not apologize.”
He revealed that the paper received a call from Ms Mansura, Media Relations from SDP, who said that Dr Chee is concerned of Wanbao’sstatement that “he is proud of his crazy past” on the day of its publication of the interview with Dr Chee.
“Because of the word ‘crazy past’ was not uttered by Dr Chee, but came from the reporter’s ‘inclusive’ style of writing of the interview. We agreed that the appearance of the title may have misled readers to conclude that the words came from the interviewee (Dr Chee),” said Mr Ting.
“The digital version of the title has been amended,” he added.
“Subsequently, Wanbao changed the title to – ‘Interview with Dr Chee: I am proud of my past actions’. At the same time, we have also made corresponding amendments in the first paragraph of the article. The rest of the article remains unchanged.”
Mr Ting further added, “Later, we sent the link of the amended article to Ms Mansura and thanked Dr Chee for the interview. Also, we welcomed his feedback to the article.”
Indeed, it’s not surprising to see SPH, ranked 157th in the world, making mistakes in its reporting, especially when it comes to news of Singapore’s opposition.
Nonetheless, by not apologizing to the person whom the paper gleefully associates negative connotations with, it reflects the character of SPH’s editorial team.
PM Lee has made a comment against Dr Chee in reference to Wanbao’s mistake. Since PM Lee has upheld the importance of a politician’s character, shouldn’t the PM also want to show his side of a good character by taking the lead to apologize to Dr Chee?
What do Bukit Batok residents think?
Author’s note: The title of this article is a result of the author’s “inclusive style of writing”.Follow us on Social Media