Speaker of Parliament Tan Chuan-Jin drew a number of cheeky comments after he planted the Tongkat Ali tree along the newly established Lornie Nature Corridor on Monday (23 Nov).

“Planting the Tongkat Ali with Kwok Peng from Nature Society (Singapore)! We were planting some of our native trees alongside the buffer established between Lornie Road and the Central Catchment forests at MacRitchie.

“When they mature, this would be a wonderful tree-lined route and because of the raised road, wildlife will be able to traverse under the road, along the old stream, from the forest to the Bukit Brown area and beyond.”

While several Singaporeans praised Mr Tan for contributing to nature conservation efforts by planting the native tree, many others were amused that the Marine Parade MP planted a tree that is believed to have aphrodisiac qualities.

The extracts of Tongkat Ali has been a part of traditional Southeast Asian herbal medicine for centuries. The root of the plant is boiled in water, and the water is consumed as a health tonic to treat fever, intestinal worms, dysentery, diarrhoea, indigestion, jaundice, erectile dysfunction and to provide relief during post-partum recovery.

The most notorious use of Tongkat Ali is its use as a purported aphrodisiac. Tongkat Ali is widely used to improve libido and enhance male sexual function.

Netizens responding to Mr Tan’s post zeroed in on the aphrodisiac use of Tongkat Ali and teased the Speaker about whether he was trying to boost Singapore’s low birth rate.

Others cheekily said that there might be a population explosion thanks to the ruling party politician’s efforts and that he should look into installing surveillance cameras where he planted the Tongkat Ali tree since the roots of the plant would be in hot demand. Read the top comments here: 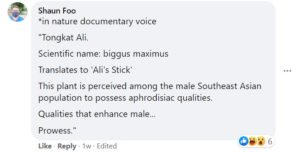 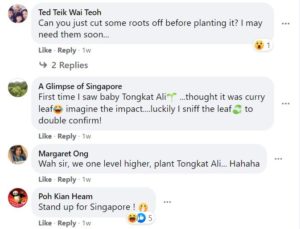 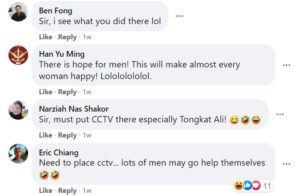