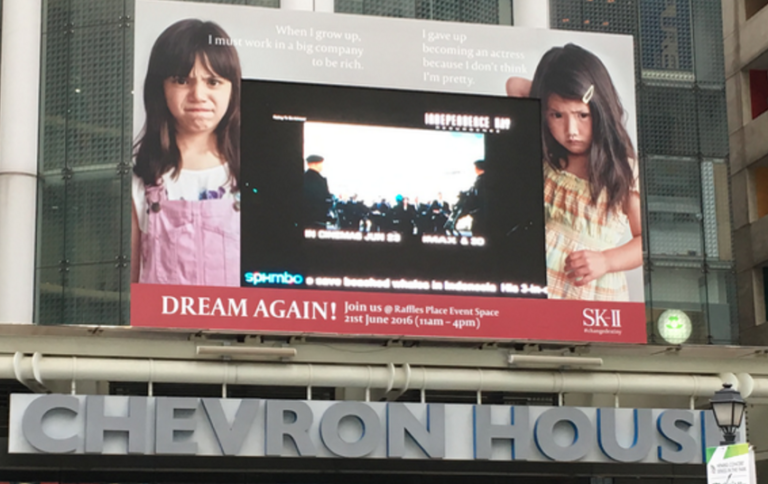 SK-II’s #ChangeDestiny campaign which is now in its second year and described by the Procter & Gamble skincare brand as its “biggest empowerment campaign” has gotten flak from some Facebook user.
Facebook user Jean Peiyi who shared a picture of the advertisement billboard in an MRT station said:
“My friend shared a really disturbing advertisement today on snapchat. The slogan says, “I gave up being an actress because i don’t think I’m pretty”. This is pretty disturbing to me. The smaller font below says “dream again! Join us!”. To top it up, the image they used is a really sad child. Every year, more and more children face body image dissatisfaction, feeling insecure and unhappy about themselves? Something that is partly influenced by how social media portrays beauty. Is this the right message at all to encourage how our younger generations view themselves? I don’t understand what is this advertisement leading to convey but indeed it does not show any body image positivity to me at all.”

SK-II’s #ChangeDestiny campaign actually challenges women to hold on to their dreams. Their four-minute video titled ‘Dream Again’ features a social experiment featuring children – who are still full of dreams – as surprise counselors for dreamless adults.
[fvplayer src=”http://youtube.com/watch?v=rw1dXuVnC8I”]
Online publication Mumbrella reported that “the campaign is running regionally in 10 cities, and locally in Singapore sees a big push go on outdoor, with large billboards in the heart of the CBD showing images of two young girls who both have assumptions about their futures based on pre-conceived notions about how to succeed in life.”
“The #changedestiny campaign challenges the belief that destiny is set at birth and celebrates women who have gone beyond limitations to achieve success,” said Markus Strobel, President Global SK-II. “By encouraging women to pursue to their dreams and empowering them to overcome personal and societal limitations, we hope to inspire more women to change their destiny.”Follow us on Social Media